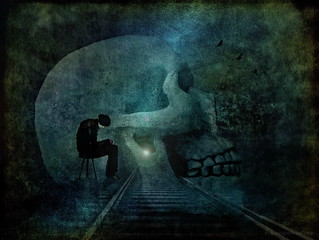 Nowadays, the innovation is widely seen in the heinous tactics, the bloody terrorists employ in quest of bringing shocking surprise. In this outlook, the innovation in the usage of tactics aimed at shocking surprise is directly aimed at psychological impact on the mind of the target. Therefore, the focused objective in today's article is to discuss the said impact with special reference to the Pakistani case.

It is the sole Pakistan that stands aloof in scoring the worth-mentioning goals and targets in the globally waged war against militancy. Remarkably, this is what the international community overtly confesses. The US Administration has too lauded what Pakistan has achieved in the said campaign through its mega-military operation like Zarb-e-Azb. Very recently, The President Barak Obama has acknowledged the sacrifices made by Pakistan and the success, achieved by it.

In fact, the massive mobility against terrorism through the said operation has broken the backbone of the terrorists, based in the porous and less-surpass-able terrains of FATA. This success is enclosed with two achievements; first the destruction of militants' bastion in FATA and the second, making the networks maneuverability difficult throughout the country. This developed positive and encouraging paces in the decision making.

It has garnered positive images on the mindset of both Pakistani security arm and public with levels rising from 32% up to 80%. Afterward, the unique civil-military relation seemed to be harvested in pursuit of the menace eradication. The terrorist's ranks and files either captured or beheaded abundantly. The national socio-economic activity, seized earlier due to chaotic situation, tracked on the lane of revival in shape of the globally renowned 46 billions CPEC mega project, destined to cease Pakistan's economic strangulation.

All the pinned factors are a driving force to moralize the nation to the new peaks. This high morale is the essential part of the positive psychological impact; the Pakistani nation needs to build up in wake of globally built war-torn image.

On the parallel path, this is not likely to be engulfed in patience by the mindset of the terrorist world. Ultimately, they are supposed to keep themselves survive and even to show them as being hard nut to crack. Although the infrastructure is badly devastated, the intelligence-based operations have threatened the remnants of the nullified organizations mobility throughout the country, yet their masterminds are to set on avoiding the negative impacts in their own areas of influence and operation.

That is why they are engaged in blowing the unexpected, un-defended and soft targets like educational institutes with the available explosives and the hand-to-hand tactics.

In this manoeuvre, they seem to earn bi-fold gains. First, the positive developments into the Pakistani security arm and public are to be terminated. They are to show that the normal life in Pakistan is still far away from coming into existence particularly in the sphere of socio-economics. Second, they have to show the world that they are arduous to be tackled down as it is perceived by Pakistani Junta.

These two respective gains are the part of the psychological man-oeuvres the banned organisations and their master minds are out to harbor. Thus, the seldom incidents of the violence would take place in Pakistan. However, the public should not be demoralized if one or more incidents erupt. This war is the war of wits where one has to demonstrate the true passions in order to avoid the negative psychological impacts.

To make final opinion, the public should pursue the path of passion in order to keep its morale high to ensure the positive psychological impact.

Related Topic(s): Morale; Psychological Warfare, Add Tags
Add to My Group(s)
Go To Commenting
The views expressed herein are the sole responsibility of the author and do not necessarily reflect those of this website or its editors.