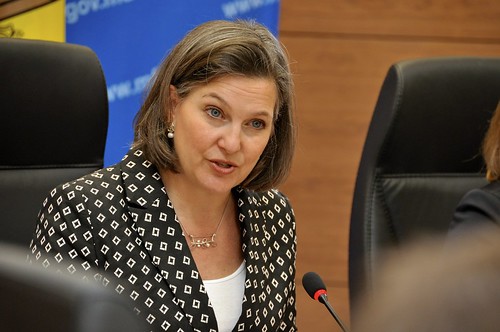 It is difficult to find anything good to say about Donald Trump, but the reality is that he has not started any new wars, though he has come dangerously close in the cases of Venezuela and Iran, and there would be considerable incentive in the next four months to begin something to bolster his "strong president" credentials and to serve as a distraction from coronavirus and black lives matter.

Be that as it may, Trump will have to run hard to catch up to the record set by his three predecessors Bill Clinton, George W. Bush and Barack Obama. Bush was an out-and-out neoconservative, or at least someone who was easily led, including in his administration Donald Rumsfeld, Richard Perle, Michael Ledeen, Reuel Gerecht, Paul Wolfowitz, Doug Feith, Elliott Abrams, Dan Senor and Scooter Libby. He also had the misfortune of having to endure Vice President Dick Cheney, who thought he was actually the man in charge. All were hawks who believed that the United States had the right to do whatever it considered necessary to enhance its own security, to include invading other countries, which led to Afghanistan and Iraq, where the U.S. still has forces stationed nearly twenty years later.

Clinton and Obama were so-called liberal interventionists who sought to export something called democracy to other countries in an attempt to make them more like Peoria. Clinton bombed Afghanistan and Sudan as a diversion when the press somehow caught wind of his arrangement with Monica Lewinsky and Obama, aided by Mrs. Clinton, chose to destroy Libya. Obama was also the first president to set up a regular Tuesday morning session to review a list of American citizens who would benefit from being killed by drone.

So the difference between neocons and liberal interventionists is one of style rather than substance. And, by either yardstick all-in-all, Trump looks pretty good, but there has nevertheless been a resurgence of neocon-think in his administration. The America the exceptional mindset is best exemplified currently by Secretary of State Mike Pompeo, who personifies the belief that the United States is empowered by God to play only by its own rules when dealing with other nations. That would include following the advice that has been attributed to leading neocon Michael Ledeen, "Every 10 years or so, the United States needs to pick up some small crappy little country and throw it against the wall, just to show the world we mean business."

One of the first families within the neocon/liberal interventionist firmament is the Kagans, Robert and Frederick. Frederick is a Senior Fellow at the neocon American Enterprise Institute and his wife Kimberly heads the bizarrely named Institute for the Study of War. Victoria Nuland, wife of Robert, is currently the Senior Counselor at the Albright Stonebridge Group and a Nonresident Senior Fellow at the Brookings Institution. That means that Victoria aligns primarily as a liberal interventionist, as does her husband, who is also at Brookings. She is regarded as a protege' of Hillary Clinton and currently works with former Secretary of State Madeleine Albright, who once declared that killing 500,000 Iraqi children using sanctions was "worth it." Nuland also has significant neocon connections through her having been a member of the staff assembled by Dick Cheney.

Nuland, many will recall, was the driving force behind efforts to destabilize the Ukrainian government of President Viktor Yanukovych in 2013-2014. Yanukovych, an admittedly corrupt autocrat, nevertheless became Prime Minister after a free election. Nuland, who was the Assistant Secretary of State for European and Eurasian Affairs at the State Department, provided open support to the Maidan Square demonstrators opposed to Yanukovych's government, to include media friendly appearances passing out cookies on the square to encourage the protesters.

Nuland openly sought regime change for Ukraine by brazenly supporting government opponents in spite of the fact that Washington and Kiev had ostensibly friendly relations. It is hard to imagine that any U.S. administration would tolerate a similar attempt by a foreign nation to interfere in U.S. domestic politics, particularly if it were backed by a $5 billion budget, but Washington has long believed in a global double standard for evaluating its own behavior.

Nuland is most famous for her foul language when referring to the potential European role in managing the unrest that she and the National Endowment for Democracy had helped create in Ukraine. For Nuland, the replacement of the government in Kiev was only the prelude to a sharp break and escalating conflict with the real enemy, Moscow, over Russia's attempts to protect its own interests in Ukraine, most particularly in Crimea.

And make no mistake about Nuland's broader intention at that time to expand the conflict and directly confront Russia. In Senate testimony she cited how the administration was "providing support to other frontline states like Moldova and Georgia." Her use of the word "frontline" is suggestive.

Victoria Nuland was playing with fire. Russia, as the only nation with the military capability to destroy the U.S., was and is not a sideshow like Saddam Hussein's Iraq or the Taliban's Afghanistan. Backing Moscow into a corner with no way out by using threats and sanctions is not good policy. Washington has many excellent reasons to maintain a stable relationship with Moscow, including counter-terrorism efforts, and little to gain from moving in the opposite direction. Russia is not about to reconstitute the Warsaw Pact and there is no compelling reason to return to a Cold War footing by either arming Ukraine or permitting it to join the North Atlantic Treaty Organization (NATO).

Victoria Nuland has just written a long article for July/August issue of Foreign Affairs magazine on the proper way for the United States to manage what she sees as the Russian "threat." It is entitled "How a Confident America Should Deal With Russia." Foreign Affairs, it should be observed, is an establishment house organ produced by the Council on Foreign Relations which provides a comfortable perch for both neocons and liberal interventionists.

Nuland's view is that the United States lost confidence in its own "ability to change the game" against Vladimir Putin, who has been able to play "a weak hand well because the United States and its allies have let him, allowing Russia to violate arms control treaties, international law, the sovereignty of its neighbors, and the integrity of elections in the United States and Europe... Washington and its allies have forgotten the statecraft that won the Cold War and continued to yield results for many years after. That strategy required consistent U.S. leadership at the presidential level, unity with democratic allies and partners, and a shared resolve to deter and roll back dangerous behavior by the Kremlin. It also included incentives for Moscow to cooperate and, at times, direct appeals to the Russian people about the benefits of a better relationship. Yet that approach has fallen into disuse, even as Russia's threat to the liberal world has grown."

What Nuland writes would make perfect sense if one were to share her perception of Russia as a rogue state threatening the "liberal world." She sees Russian rearmament under Putin as a threat even though it was dwarfed by the spending of NATO and the U.S. She shares her fear that Putin might seek "...reestablishing a Russian sphere of influence in eastern Europe and from vetoing the security arrangements of his neighbors. Here, a chasm soon opened between liberal democracies and the still very Soviet man leading Russia, especially on the subject of NATO enlargement. No matter how hard Washington and its allies tried to persuade Moscow that NATO was a purely defensive alliance that posed no threat to Russia, it continued to serve Putin's agenda to see Europe in zero-sum terms."

Related Topic(s): Russia; Ukraine; Victoria Nuland; Vladimir Putin; Yanukovych, Add Tags
Add to My Group(s)
Go To Commenting
The views expressed herein are the sole responsibility of the author and do not necessarily reflect those of this website or its editors.