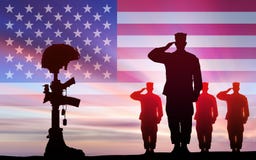 Each and every year at this time in November our nation remembers those who fought and died wearing a US military uniform. But only a few of what they named 'Wars' were ones in which our young military were rightfully sent overseas to fight.

This writer can only think of one such time and that was WW-2. All the rest of them were disgraceful attempts by our (so called) leaders to keep a stranglehold on the world.

Sadly, the dead wearing those proud US uniforms of various branches have always been transformed into heroes. Sadder still, they were not heroes, rather pawns used disgracefully in some Military Industrial Empire's chess game. Worse still, in most cases they were sent into harm's way by leaders, both political and military, who never had to smell the odor of instant death:

The procession of generals marches slowly

with the clouds of gunpowder behind them,

as another encounter eases to flame

and the shouts of battle burn invisibly

from what once were bunkers of manhood

And the plotters never once look back

for the optimism of victory will not allow it.

They simply smile and pat one another

and then interrupt for a quick reflection;

And their silence is for that glorious past

{Philip A Farruggio is the son and grandson of Brooklyn, NYC longshoremen. A graduate of Brooklyn College ( class of '74 with a BA in Speech & Theater), he is a free lance columnist posted on World News Trust, Nation of Change Blog, Op Ed (more...)
Related Topic(s): Blood; Dissent; Empire; Generals; Heroes; Military; Military-industrial Complex; Presidency; Veterans Day; Wars, Add Tags
Add to My Group(s)
Go To Commenting
The views expressed herein are the sole responsibility of the author and do not necessarily reflect those of this website or its editors.