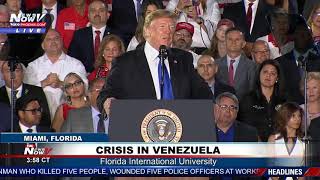 Yesterday morning the doors of the Venezuelan Embassy in Washington, DC were smashed by DC Police using a battering ram to barge in and arrest the four remaining peace activists who were invited by embassy personnel in early April after the Trump administration ordered the diplomats to depart the US.

Ordering the diplomats to leave was part of the Trump administrations plan to recognize Juan Guaido, the little known Venezuelan Assembly leader as the interim president of Venezuela while no longer recognizing Nicolas Maduro as the legitimately elected president of the country.

Prior to yesterday's police raid the peace activists inside the embassy had been besieged by ultra right wing pro Guaido mobs for days and nights verbally assaulting them, hurling invective and even storming the doors as US Secret police stood by watching and doing nothing.

All this occurring as PEPCO, the local power company turned off the electric to the embassy while food and medical supplies were prevented from being delivered by the pro-Guaido mobs outside.

The police raid tearing down the doors of the embassy and arrest of the invited peace activists was an unprecedented move by the US, clearly in violation of the Vienna Convention of 1961 which proclaimed the sovereignty of foreign embassies as "inviolable" unless the host nation were invited to enter by the government of the embassy. That clearly didn't happen.

This sets a precedent making all embassy's fair game for a host country to justify seizing another countries embassy if the host country ceases to recognize that countries government.

What is also notable-as far as this writer knew at the time-RT was the one news outlet that reported the police raid and arrests at the Venezuelan Embassy while the so called nations newspaper, The New York Times whose front page signature, "All the News That's Fit to Print" as well as the Washington Post didn't see fit to even mention the police raid of the embassy.

Also there was no mention of it by the White House or the State Department. Was it because the police breaking the door and barging into a foreign embassy in the Georgetown area of Washington would have been an embarrassment at the very least? Then having to explain and answer questions about it? Try dissembling that little caper.

But think about it. This illegal entry into a foreign government's embassy just adds to the sordid machinations committed by a US government gone completely off the rails. Then exacerbated by the likes of crazies in Trump's entourage notably national security advisor John Bolton and Secretary of State Mike Pompeo, Vice President Mike Pence and the convicted criminal Elliot Abrams, Trump's special envoy to Venezuela.

Meanwhile there was Trump on Wednesday telling acting Secretary of Defense Patrick Shanahan he does not want to go to war with Iran. Another unconfirmed report had Trump upset with Bolton after the latter had said last week's coup attempt by Guaido would be successful that many of Maduro's military would abandon him. It quickly fizzled leaving Maduro firmly in command.

In a perfect world Trump would rid himself of the "albatross" around his neck by firing these war mongers. That should be a no brainer. That it isn't remains cause for concern.

Retired. The author of "DECEIT AND EXCESS IN AMERICA, HOW THE MONEYED INTERESTS HAVE STOLEN AMERICA AND HOW WE CAN GET IT BACK", Authorhouse, 2009
Related Topic(s): Embassies; Police; Venezuelan Coup; Venezuelan Embassy; Venezuelan Embassy Protectors, Add Tags
Add to My Group(s)
Go To Commenting
The views expressed herein are the sole responsibility of the author and do not necessarily reflect those of this website or its editors.