"I see Trump picked a VP," noted the White Rabbit, as he leafed through the latest issue of the Times. 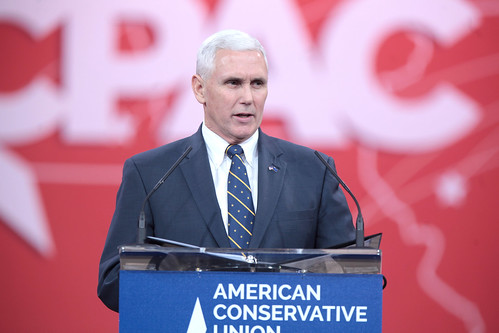 "Pence wise, pound foolish, if you ask me," said Alice. "The dude is stone age."

"Yes, dear, precisely why he was chosen," the Mad Hatter opined. "After the Bern flamed out, it was supposed to be a clear road for Hillary. But the latest polls showed that Trump was becoming a real threat to the soon-to-be-crowned queen."

"You're kidding," the Rabbit said.

"Always," said the Hatter. "But there were actually Bernie supporters who didn't toe the party line and were thinking of voting for 'anyone but Hillary'. So, the powers that be wanted to be sure that Trump wouldn't be seen as a viable alternative."

"But Trump is a racist fascist," said Alice.

"Yes, Trump, the candidate, did stake out that position. But he's got a public record that's a lot more liberal, and,, in some ways, more liberal than Hillary, so he was starting to look like a real option for those 'hold your nose' folks."

"And now, instead of moving towards the center for the general election, Trump chooses a far right winger to scare voters back to Hillary," agreed the Rabbit. "Got it." A frown. "So he really doesn't want to win."

"I'm old enough to have a pretty good fallout shelter," said the Hatter. "So I may actually be around after World War III."

"Always," the Hatter agreed. "Hillary is the candidate for truth, justice, and the American way. And we all know what that means."

"I'm sure there'll be a bone tossed to us on some domestic issues, but everything else will be knife to the bone. Wall Street and War," sighed the Rabbit.

Related Topic(s): Draft; Voting; Women, Add Tags
Add to My Group(s)
Go To Commenting
The views expressed herein are the sole responsibility of the author and do not necessarily reflect those of this website or its editors.