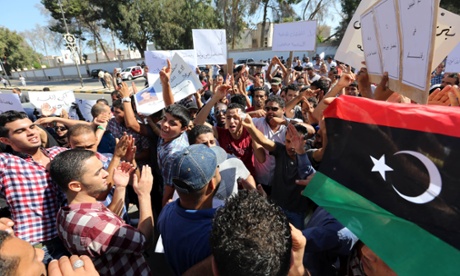 (Image by Unknown Owner)   Details   DMCA
Libyan efforts to arrest the killers of a man credited with capturing Ghaddafi have turned into a siege of the city of Bani Walid. (Photograph: Mahmud Turkia/AFP/Getty Images)

Extensive travel will likely prevent me from writing much this weekend, but there are several brief items worthy of note:

(1) In Sunday's Washington Post, law professor Jonathan Turley has a superb Op-Ed on the gradual death of free speech in the west, and he places the blame squarely where it belongs: on the veneration of "sensitivities" over the free flow of ideas, and relatedly, the adolescent need on the part of many adults to plead with authority figures to shield them from views they find offensive. His essay is well worth reading in full, but here is the crux:

"Free speech is dying in the western world. While most people still enjoy considerable freedom of expression, this right, once a near-absolute, has become less defined and less dependable for those espousing controversial social, political or religious views. The decline of free speech has come not from any single blow but rather from thousands of paper cuts of well-intentioned exceptions designed to maintain social harmony. . . .

"Of course, free speech is often precisely about pissing off other people -- challenging social taboos or political values. . . .

"Such efforts focus not on the right to speak but on the possible reaction to speech -- a fundamental change in the treatment of free speech in the West. The much-misconstrued statement of Justice Oliver Wendell Holmes that free speech does not give you the right to shout fire in a crowded theater is now being used to curtail speech that might provoke a violence-prone minority. Our entire society is being treated as a crowded theater, and talking about whole subjects is now akin to shouting 'fire!' . . . .

"The very right that laid the foundation for western civilization is increasingly viewed as a nuisance, if not a threat. Whether speech is deemed inflammatory or hateful or discriminatory or simply false, society is denying speech rights in the name of tolerance, enforcing mutual respect through categorical censorship.

I'm accused with some frequency of focusing my critiques on the US -- the reason I do so is set forth here in reasoning I adopt in full -- but vibrant free speech protection is a core liberty which the US, though very far from perfect, still safeguards better than most countries.

What has always driven repression of speech are the same universal human traits that are now flourishing as part of this latest effort: the tyrannical thirst for the power to silence ideas one dislikes, the self-regarding belief that one can apply objective principles of decency, "community" and Goodness to decide which modes of expression and which ideas should be barred, authoritarian trust in leaders, and -- worst of all -- the refusal to understand that endorsing repression of ideas leaves one with no principled grounds to object when one's own ideas end up on the prohibited list.

Add to all that the ignoble tendency to object to -- or even recognize the existence of -- repression only when it affects one directly (a dynamic I described here when writing about the inability of many passive, obedient western citizens to acknowledge the repression of their own governments because such citizens are never the ones targeted for repression), and it's clear that the opposition to free expression is grounded in the worst of human attributes.

In sum, it takes a staggering amount of hubris to believe you're in any position to decide which ideas are so objectively and permanently wrong that they should be barred. It takes an equally staggering amount of childishness to want some central authority to protect you from ideas that you find upsetting. And it takes extreme historical ignorance not to realize that endorsing the maintenance of a list of prohibited ideas and then empowering authorities to enforce it will inevitably lead to abusive applications of that power and, sooner or later, will likely result in the suppression of your own ideas as well.

(2) The New York Times this morning reports on the pervasive violence, chaos, instability and militia rule still hopelessly plaguing Libya almost a year after Gadaffi's brutal killing. In sum, the "central government" has no real authority outside of Tripoli and must therefore depend upon the very militias which they claim they are trying to undermine, a dilemma that is "trapping Libya in a state of lawlessness." Moreover, the temptation on the part of the US government to launch strikes in Libya at those who attacked the consulate would likely trigger "a popular and potentially violent backlash in... what the New York Times calls "the only Arab country whose people largely have warm feelings toward Washington."

In the immediate aftermath of Gadaffi's death, proponents of the intervention rushed to publicly congratulate themselves and declare their pro-war position vindicated, to serve as a model for future wars. Worse, war proponents (with a couple of noble exceptions) flamboyantly celebrated their own prescience and then ignored the aftermath of the war they helped cheer on, even though it is only that aftermath that will determine whether the intervention was actually good or bad for most Libyans. Only the controversy surrounding the Benghazi attack has re-focused attention on the struggles in that country after the war.

Related Topic(s): Libya Revolution; Rights; State Terrorism; Surveillance, Add Tags
Add to My Group(s)
Go To Commenting
The views expressed herein are the sole responsibility of the author and do not necessarily reflect those of this website or its editors.