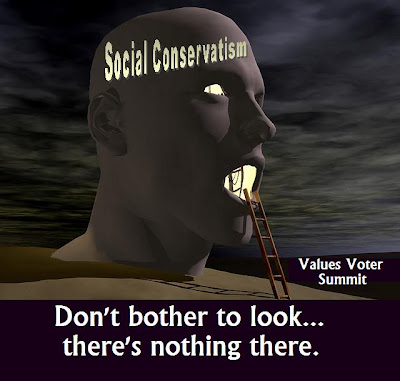 It all started with Sarah Palin, I think. One wonders what the McCain campaign thought of the woman as they asked her questions. Actually, one wonders whether or not they asked her any questions at all. Of course, desperation grabs at anything that looks good on the surface, and on the surface, Palin looked very good. Besides, the Republican Party had not bothered to groom anyone like Palin and they discovered too late that their base wanted new blood. They also followed one of the primary dictates of the Christian Right: if they say that they're Christian and pro-life, refer to God enough times and hate the Left with a fervor that borders on paranoia, then they're a fit warrior in the culture wars. Palin looked right and sounded right, therefore she was right.

The problem with those dictates: they're the basis of good, entertaining comedy. And the thing that a political party has too much of is comedy...and the clowns that perpetuate it.

The Values Voter Summit might be looked upon as an assemblage of clowns trying to look indignant at the way the country is being run. At best, it is a group of our country's highest ranking, most vocal, most self-righteously arrogant dullards. At worst, it is a group that hopes to spread self-righteous tyranny. They have recently taken on the mantle of "Social Conservatives" since the terms "Christian Right" or "Religious Right" have had some negative connotations. But that term, however, has been overshadowed by the efforts of some to declare that the United States is a "Christian Nation" and there have been rumblings from them of a "Christian ONLY Nation". No matter what they call themselves, they are evolving into what Sinclair Lewis warned us about: "When fascism comes to America it will be wrapped in a flag and carrying a cross."

The much-trumpeted Summit is sponsored by Tony Perkins and his Family Research Council. It serves as the pinacle of his career as a lobbyist for the Christian Right. And since his only boss is the venerable James Dobson, Perkins takes it upon himself to rally his culture war troops once a year to spout anger and revenge against liberals, moderates, atheists, homosexuals, unions, illegal immigrants, progressive churches and non-Christians. Put another way: "social justice" is not on the program.

This last Summit (Sept. 16-19 in D.C.) was, (as usual) entertaining, regaling the rest of the country with its bloviators, tiresome buzz-words, demonizations and pronouncements which eluded critical thinking. The speakers and awardees were carbon copies of last year's Summit with the exceptions that Senate candidate Christine O'Donnell substituted for Carrie Prejean and Bryan Fischer substituted for just about every hate group in the country. And among the likes of Mike Huckabee, Michele Bachmann, Rick Santorum, and Gary Bauer was Prof. Dr. Ergun Caner, the Muslim-turned-Christian impersonator, which proves that the Summit coordinators believed in forgiveness, if not sagacity.

And the stars, Fischer and O'Donnell, proved that the dictates of the Christian Right were strongly adhered to (esp. in the case of O'Donnell, but more about that later).

Bryan Fischer exuded confidence - slightly subdued - while he quoted scripture, compared the Biblical Joshua to George Washington, said that Christians who don't vote would be giving the country over to pagans and atheists, condemned politicians who supported same-sex marriages, civil unions or even domestic partnerships as evil and posited "the involuntary transfer of resources" (taxing the rich) as "theft." Everything to Fischer was (and always is, in his radiocasts) black and white, good or bad. Nothing was nuanced. Nuance takes a commitment to reason. And if there's anything Fischer is not committed to, it's reason. But while hardcore conservatives questioned the wisdom of putting Fischer on the stage, he nonetheless elicited applause with his hatred cloaked as bona fide fact and his eschatology as that put forth by the finest Biblical scholar.

Christine O'Donnell's speech was not nuanced either. Oh, it contained the rather pointless "This is OUR country" phrase that will doubtless go down in the annals of the Summit as a "turning point" (whatever that might be). Her pre-witchcraft moments were about as pithy as a sledge hammer while she tried to convince people that she was serious about God, love of country and anything else that could rally them.

If the choice of Sarah Palin by Republicans was the first instance of bad Republican vetting, and Carrie Prejean was the mistake of the Christian Right, then O'Donnell is certainly the "oh, sh*t!" of the Tea Party movement. A former campaign manager called her a "fraud," and now she is being charged by an ethics watchdog group of embezzling $20,000 in campaign funds. What's more shocking, however, is the numbers of people in Delaware who voted for her without knowing some of her "principles":

Rev. Dan Vojir is has been writing/blogging on religion and politics for the better part of ten years. A former radio talk show host (Strictly Books " Talk America Radio Network) and book publisher, Dan has connected with some of the most (more...)
Related Topic(s): Bryan Fischer; Christine O-donnell; Comedy; Conservatives; Entertaining; Fraud; God; STUPIDITY; Values Voter Summit; Vetting, Add Tags
Add to My Group(s)
Go To Commenting
The views expressed herein are the sole responsibility of the author and do not necessarily reflect those of this website or its editors.