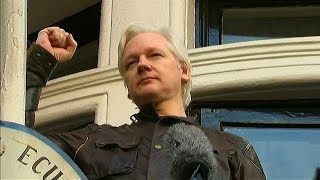 Memorandum for: The US Embassies of Ecuador and the United Kingdom, and the U.S. State Department

For six years, Wikileaks editor Julian Assange has been effectively imprisoned without charges at Ecuador's London embassy. In that time, two international courts and dozens of respected legal and human rights organizations have decried actions of the UK, US and Swedish governments that confine the journalist in what now amounts to torturous isolation, deprived of space, sunlight, visitors, communication with the outside and necessary medical care.

The catalyst was an arcane effort by the Swedish government to extradite Assange for questioning about claims of sexual improprieties.1 The UK government subsequently arrested Assange and released him on bail.2 Ecuador granted Assange asylum at its embassy based on concerns he could be extradited to the US where he would not receive a fair trial and could receive a death sentence.3 (Former Obama DOJ spokesperson Matthew Miller has acknowledged that US officials intended to arrest Julian Assange but decided against it because of the expected impacts on press freedom.)4

The UK government threatens to arrest Assange if he leaves the embassy for "not surrendering at bail" and refuses to rule out extradition to the US.5 Under a new president, Ecuador has cut off Assange's communications with the outside world.

In June, 2014, The National Lawyers Guild and 59 human rights and legal organizations petitioned the United Nations to act on violations of Assange's "fundamental human rights." In addition, "33 union, human rights, media and civil society organizations" petitioned the Human Rights Commission in Geneva on behalf of freedom for Assange. Reports submitted by the groups identified "numerous systematic deficiencies in Swedish pre-trial procedures like the routine placement of persons who have not been charged with any crime in indefinite, isolated, or unexplained pre-charge detention."6

In February 2016, the UN Office of the High Commissioner for Human Rights (OHCHR) concluded that Assange's situation constitutes "arbitrary detention" and violates both the Universal Declaration on Human Rights and the International Covenant on Civil and Political Rights.7 Assange's Swedish lawyer, Per Samuelson, told The Guardian, 4 Feb 2016, "If he is regarded as detained, that means he has served his time, so I see no other option for Sweden but to close the case."8

Another year would pass, however, before Sweden dropped its investigation, after finally consenting to interview Assange at the embassy.9 Recently obtained emails show that Sweden would have dropped the case years earlier but for pressure from UK authorities.10 In summary, Assange has been confined for six years over allegations that never resulted in charges, much less a criminal conviction.

On July 12, 2018, the Organization of American States' (OAS) Inter-American Court of Human Rights (IACHR) sent out a ruling11 that was virtually unnoticed by US news media. The IACHR found "it is the duty of nations to allow for the passage of successful asylum seekers from embassies to the mainland territory of the state that has granted an individual asylum."

For Julian Assange, this would mean that, according to the Court's decision, Britain has a legal obligation to allow Julian Assange to exit the Ecuadorian Embassy in London in peace and allow for his safe transit to an airport from which he would be able to fly to Ecuador, the country that has granted Assange asylum and where he now also holds formal citizenship.12

"[I]t is imperative," the ruling states, "that Assange is allowed to make the safe passage to Ecuador demanded by the Court as his physical and mental health conditions have been described as deteriorating rapidly. If, nevertheless, UK authorities insist on arresting Assange, "the British government will have wantonly failed to uphold Assange's rights as a legitimate receiver of asylum by Ecuador."13

The IACHR ruling suggests further that outright abuses occurred when Ecuador removed security assigned for Assange;14 when the UK rejected Ecuador's request for safe passage of Assange to Ecuador15; and when the US obstructed efforts to end Assange's virtual imprisonment.16

Consortiumnews.com was founded by Robert Parry in 1995 as the first investigative news magazine on the Internet. The site was meant to be -- and has become -- a home for important, well-reported stories and a challenge to the inept but dominant (more...)
Related Topic(s): Asylum; Health; Humanitarian Crisis; Julian Assange Martyr; Vips; Wikileaks, Add Tags
Add to My Group(s)
Go To Commenting
The views expressed herein are the sole responsibility of the author and do not necessarily reflect those of this website or its editors.