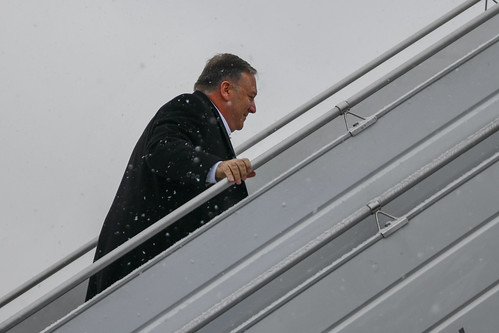 MEMORANDUM FOR: The President.

SUBJECT: Is Pompeo's Iran Agenda the Same As Yours?

After the close call Thursday when you called off the planned military strike on Iran, we remain concerned that you are about to be mousetrapped into war with Iran. You have said you do not want such a war (no sane person would), and our comments below are based on that premise. There are troubling signs that Secretary Pompeo is not likely to jettison his more warlike approach. More importantly, we know from personal experience with Pompeo's dismissive attitude to instructions from you that his agenda can deviate from yours on issues of major consequence.

Pompeo's behavior betrays a strong desire to resort to military action perhaps even without your approval to Iranian provocations (real or imagined), with no discernible strategic goal other than to advance the interests of Israel, Saudi Arabia and the UAE. He is a neophyte compared to his anti-Iran partner John Bolton, whose dilettante approach to interpreting intelligence, strong advocacy of the misbegotten war on Iraq (and continued pride in his role in promoting it), and fierce pursuit of his own aggressive agenda are a matter of a decades-long record. You may not be fully aware of our experience with Pompeo, who has now taken the lead on Iran.

That experience leaves us with strong doubt regarding his trustworthiness on issues of consequence to you and the country, including the contentious issue of alleged Russian hacking into the DNC. The sketchy "evidence" behind that story has now crumbled, thanks to some unusual candor from the Department of Justice. We refer to the extraordinary revelation in a recent Department of Justice court filing that former FBI Director James Comey never required a final forensic report from the DNC-hired cybersecurity company, CrowdStrike.

Comey, of course, has admitted to the fact that, amid accusations from the late Sen. John McCain and others that the Russians had committed "an act of war," the FBI did not follow best practices and insist on direct access to the DNC computers, preferring to rely on CrowdStrike reporting. What was not known until the DOJ revelation is that CrowdStrike never gave Comey a final report on its forensic findings regarding alleged "Russian hacking." Mainstream media have suppressed this story so far; we reported it several days ago.

The point here is that Pompeo could have exposed the lies about Russian hacking of the DNC, had he done what you asked him to do almost two years ago when he was director of the CIA.

"You may wish to ask CIA Director Mike Pompeo what he knows about this.["This" being the evidence-deprived allegation that "a shadowy entity with the moniker 'Guccifer 2.0' hacked the DNC on behalf of Russian intelligence and gave DNC emails to WikiLeaks."] Our own lengthy intelligence community experience suggests that it is possible that neither former CIA Director John Brennan, nor the cyber-warriors who worked for him, have been completely candid with their new director regarding how this all went down."

Three months later, Director Pompeo invited William Binney, one of VIPS' two former NSA technical directors (and a co-author of our July 24, 2017 Memorandum), to CIA headquarters to discuss our findings. Pompeo began an hour-long meeting with Binney on October 24, 2017 by explaining the genesis of the unusual invitation: "You are here because the President told me that if I really wanted to know about Russian hacking I needed to talk to you."

But Did Pompeo "Really Want to Know"?

Apparently not. Binney, a widely respected, plain-spoken scientist with more than three decades of experience at NSA, began by telling Pompeo that his (CIA) people were lying to him about Russian hacking and that he (Binney) could prove it. As we explained in our most recent Memorandum to you, Pompeo reacted with disbelief and now -- get this -- tried to put the burden on Binney to pursue the matter with the FBI and NSA.

Consortiumnews.com was founded by Robert Parry in 1995 as the first investigative news magazine on the Internet. The site was meant to be -- and has become -- a home for important, well-reported stories and a challenge to the inept but dominant (more...)
Related Topic(s): Investigation; Iran; Iran War; Memo To President; Vips, Add Tags
Add to My Group(s)
Go To Commenting
The views expressed herein are the sole responsibility of the author and do not necessarily reflect those of this website or its editors.