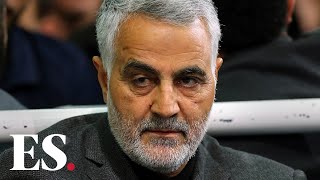 SUBJECT: Doubling Down Into Another "March of Folly"?

The drone assassination in Iraq of Iranian Quds Force commander General Qassem Soleimani evokes memory of the assassination of Austrian Archduke Ferdinand in June 1914, which led to World War I. Iran's Supreme Leader Ayatollah Ali Khamenei was quick to warn of "severe revenge." That Iran will retaliate at a time and place of its choosing is a near certainty. And escalation into World War III is no longer just a remote possibility, particularly given the multitude of vulnerable targets offered by our large military footprint in the region and in nearby waters.

What your advisers may have avoided telling you is that Iran has not been isolated. Quite the contrary. One short week ago, for example, Iran launched its first joint naval exercise with Russia and China in the Gulf of Oman, in an unprecedented challenge to the U.S. in the region.

It is time to call a spade a spade. The country expecting to benefit most from hostilities between Iran and the U.S. is Israel (with Saudi Arabia in second place). As you no doubt are aware, Prime Minister Benjamin Netanyahu is fighting for his political life. He continues to await from you the kind of gift that keeps giving. Likewise, it appears that you, your son-in-law, and other myopic pro-Israel advisers are as susceptible to the influence of Israeli prime ministers as was former President George W. Bush. Some commentators are citing your taking personal responsibility for providing Iran with a casus belli as unfathomable. Looking back just a decade or so, we see a readily distinguishable pattern.

Former Israeli Prime Minister Ariel Sharon played a huge role in getting George W. Bush to destroy Saddam Hussein's Iraq. Usually taciturn, Gen. Brent Scowcroft, national security adviser to Presidents Gerald Ford and George H.W. Bush, warned in August 2002 that "U.S. action against Iraq ... could turn the whole region into a cauldron." Bush paid no heed, prompting Scowcroft to explain in Oct. 2004 to The Financial Times that former Israeli Prime Minister Ariel Sharon had George W. Bush "mesmerized"; that Sharon has him "wrapped around his little finger." (Scowcroft was promptly relieved of his duties as chair of the prestigious President's Foreign Intelligence Advisory Board.)

In Sept. 2002, well before the attack on Iraq, Philip Zelikow, who was Executive Secretary of the 9/11 Commission, stated publicly in a moment of unusual candor, "The 'real threat' from Iraq was not a threat to the United States. The unstated threat was the threat against Israel." Zelikow did not explain how Iraq (or Iran), with zero nuclear weapons, would not be deterred from attacking Israel, which had a couple of hundred such weapons.

When a docile, Peter-principle, "we-are-still-winning-in-Afghanistan" U.S. military leadership sends more troops (mostly from a poverty draft) to be wounded and killed in hostilities with Iran, Americans are likely, this time, to look beneath the equally docile media for answers as to why. Was it for Netanyahu and the oppressive regime in Israel? Many Americans will wake up, and serious backlash is likely.

Events might bring a rise in the kind of anti-Semitism already responsible for domestic terrorist attacks. And when bodybags arrive from abroad, there may be for families and for thinking Americans, a limit to how much longer the pro-Israel mainstream media will be able to pull the wool over their eyes.

Those who may prefer to think that Gen. Scowcroft got up on the wrong side of the bed on Oct. 13, 2004, the day he gave the interview to The Financial Times may profit from words straight from Netanyahu's mouth. On Aug. 3, 2010, in a formal VIPS Memorandum for your predecessor, we provided some "Netanyahu in his own words." We include an excerpt here for historical context:

Consortiumnews.com was founded by Robert Parry in 1995 as the first investigative news magazine on the Internet. The site was meant to be -- and has become -- a home for important, well-reported stories and a challenge to the inept but dominant (more...)
Related Topic(s): Assassination; Drone; Folly Of War; Iran; Iranian General Killed; Vips, Add Tags
Add to My Group(s)
Go To Commenting
The views expressed herein are the sole responsibility of the author and do not necessarily reflect those of this website or its editors.