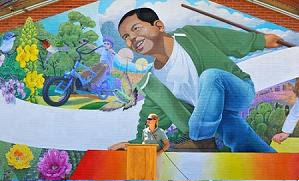 "I'm not a racist by any stretch of the imagination, but whenever people start talking about diversity, it's a word I can't stand." 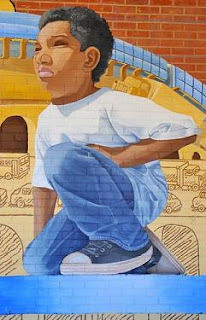 A mural on the side of an elementary school in Prescott, AZ is quickly becoming the icon of Arizona's legislative and educational goals. It depicts the actual children of the school in solidarity for green transportation. Sounds cool, eh? But one city councilman/broadcaster wants it destroyed. Because the most prominent child in the large mural is black. And most of the other kids are ...brown.

While painting it, the local artists were subjected to the epithets of "n-word" and "spic" shouted out of passing cars. The principal of the school has decided that the best thing to do under the circumstances is to lighten the faces of the kids!

R.E. Wall, director of the Prescott Downtown Mural Project, described weeks of tense working conditions for the "Mural Mice," the group of artists responsible for the Miller Valley mural and several others around town.

"The pressure stayed up consistently," Wall said. "We had two months of cars shouting at us."

Faces in the mural were drawn from photographs of the Miller Valley School (no student over 10 years old, Miller Valley being only a K-5 school). The artwork was chosen by both students and faculty.

Steve Blair, the broadcaster/councilman says he is "ashamed" of the "diversity power struggle" that he thinks is depicted in the mural.

It hasn't been reported yet what the children in the mural think about their images being lightened to conform with Prescott's image of itself. Neither has it been said what they think of the people of Prescott who obviously hate them.

Prescott's image is getting to be the image of Arizona as well.

Rev. Dan Vojir is has been writing/blogging on religion and politics for the better part of ten years. A former radio talk show host (Strictly Books " Talk America Radio Network) and book publisher, Dan has connected with some of the most (more...)
Related Topic(s): Arizona; Border Fence; Diversity; Diversity; Governor Jan Brewer; Illegal Immigration; Immigration; Immigration Employment Illegal; Immigration Reform; Protestors, Add Tags
Add to My Group(s)
Go To Commenting
The views expressed herein are the sole responsibility of the author and do not necessarily reflect those of this website or its editors.