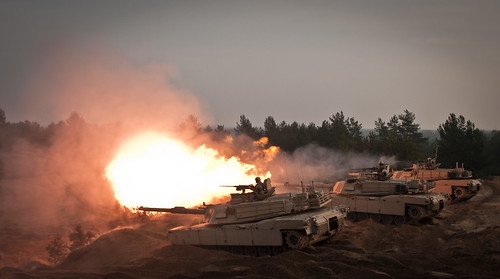 The State Security Department and the Second Investigation Department under the Ministry of National Defence of Lithuania on March 26, 2018 presented to the society and media representatives the Assessment of national security threats.

It is possible to say, that the document is entirely devoted to Russia and its confrontational foreign policy. Taking into account that Lithuania falls in the sphere of Russian interests it is clear why Russia has become the main threat to the national security of the Republic of Lithuania.

At the same time, many other threats have not been named by the analysts. While Lithuanian government can't think of anything more than Russia, it's fundamentally important to define other threats to the country.

In appliance with published assessment, the terrorist threat level in Lithuania remains low. Apparently the authors of the report underestimate this kind of threat. It's known, that more and more Islamic militants flee to the European countries under the guise of refugees due to the situation in Syria. It's not a secret that Lithuanian government always openly and uncompromisingly supported a tough fight against international terrorists, that naturally increases the risk of possible revenge on their part.

France is a good example of this. On March 29, 2018 a driver tried to ram a car into a group of soldiers out jogging near their barracks. The attack followed a hostage-taking in the southwest of France on March 23, in which four people were killed. In connection with this, the ignoring and minimizing terrorist threat by Lithuanian government are seen as unacceptable.

Another serious problem which Lithuania has encountered is the energy crisis. "Today Lithuania has the highest electricity deficit among the Baltic States. The country's demand in 2016 was 12.25 TWh of electricity, but its own generation was only 3.97 Twh," said Lithuania's Energy Minister Zhigimantas Vaiciunas speaking of Lithuania's energy strategy until 2030. The fact that Lithuania is fully dependent on other countries' energy resources endangers the very idea of state independence. And of course, authorities should pay more attention to this issue.

Besides the Russian actions, the loss of citizens' confidence in the acting parliament also presents the danger to Lithuania. Thus there was a public protest at the Independence Square in Vilnius near the parliament building this week, during which protesters urged the parliament to disband.

The protest followed the unsuccessful impeachment of lawmaker Mindaugas Bastys, who was accused of allegedly cooperating with foreign intelligence and security officers, as well as criminal figures and thus grossly violating the constitution.

Even Lithuanian President Dalia Grybauskaite commented these disturbances and said " Lithuania's lawmakers should stop "quarrelling" and start to work for the state and its people."

Eventually the situation when n early all political groups in the parliament have stopped to fulfill their duties and got involved into squabble, undermines the stability and violates constitutional order of Lithuania.

While the authorities concern only about one single threat - possible Russian aggression -- they are distancing themselves from the people. According to the Eurostat data 30.1% of Lithuanian residents were below the poverty line last year and it was one of the worst indicator in Europe. By the way, as the Eurobarometer survey stated in February, Lithuanian residents mostly concerned about food and services rising prices. The majority of Lithuanian residents -- 65% -- called the price increase the most serious problem .

All these facts show that government in Lithuania risks to become weaker and to lose the support of society. Maybe, officials for a moment have to stop playing global politics and take care of the way the Lithuanians live. As well as they should define the real threats...

Related Topic(s): Security, Add Tags
Add to My Group(s)
Go To Commenting
The views expressed herein are the sole responsibility of the author and do not necessarily reflect those of this website or its editors.