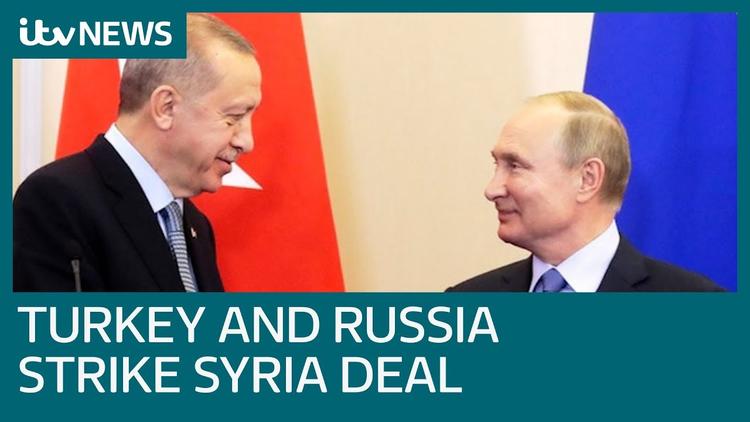 With Trump and his special operations troops out of Syria, it fell to Russia to deal with Turkey's invasion of northern Syria to push back from its border the leftist Kurdish People's Protection Units (YPG).

Trump has not only become irrelevant, but the troops formerly stationed in Syria now seem to be Flying Dutchmen, wandering the earth without a home. Secretary of Defense Mark Esper had said they would be based in western Iraq, but Baghdad immediately announced that they had no such permission.

Turkey had planned an incursion to the depth of 20 miles along a 276-mile stretch of northeast Syria, from which it planned to expel hundreds of thousands of Kurdish residents and replace them with Syrian Arab refugees from elsewhere in Syria, who now live in Turkey. That is a little over 5,500 square miles.

Instead, Turkey will keep for a while a 75-mile long stretch between Tel Abyad and Ras al-Ayn, to a depth of 20 feet down into Syria. That is only 1,500 square miles.

On either side of the miniaturized Turkish "safe zone" (i.e., zone of ethnic cleansing), the Russian army will patrol alongside Turkish troops over in Turkey, with Syrian Arab Army troops taking over security duties in the Kurdish areas south of the border.

This outcome is an enormous climb-down by Turkey in the face of Russian insistence.

Related Topic(s): Putin; Syria Attack; Syrian Situation; Trump And Putin; Trump Unwelcome; Turkey Attacks Syria, Add Tags
Add to My Group(s)
Go To Commenting
The views expressed herein are the sole responsibility of the author and do not necessarily reflect those of this website or its editors.