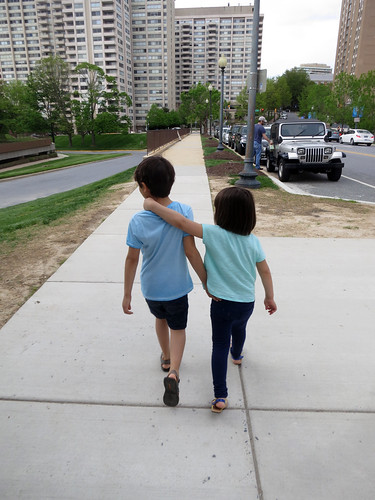 Hermanos
(Image by Daquella manera)   Details   DMCA
Donald Trump is not the only problem in the United States. The problem with the United States if truth to be known, are the American people. Sometimes it seems that the American people don't pay attention to anything" unless it's sensational. The day-to-day details of what the government does and how the government works isn't interesting. The American people are distracted with their cell phones and their Facebook and the text's that they send to each other and trying to make a living where wages have been stagnant and people with degrees from universities and colleges are working in fast food restaurants to make enough to feed their families.

The fact is that countries are made up of the people that live in them. No country has been blessed by any God and no nation has a divine purpose on the planet. Some countries are good places to live in while some countries are hell on earth. This country we call America, is becoming a country that is fractured and divided by race and politics.

Sometimes I wonder if this isn't all by design. The American government Is a flagrant violator of human rights around the world, and the people of the United States, living in the richest nation on earth, are watching our society being divided into two classes; the exceedingly rich and the poor. There is no time in the history of the United States were the wealthiest Americans have such a phenomenal share of this nation's economy

What should sound the alarm bell for all of us, is that this country has more people incarcerated and behind bars than any other country in the world. The budget also sounds a telling and ominous story. The United States of America which is represented by our government, chooses to spend almost 55% of its entire budget on it's military. The United States spends almost 60% of the entire planet's military spending.

What is so troubling, is that we spend about 15% of our budget on our health programs and that seems to be a huge concern to the people in government. The United States has a deficit of about $20 trillion dollars and, yet the department of defense can't seem to have a verifiable audit.

It is estimated it would cost $6 billion a year to make state run colleges and universities tuition free. This sounds like a lot of money, but when you think that we spend over $650 billion on the military every year and that doesn't include the money we spend for war.

In a democracy, one that is supposed to govern all Americans, rich and poor, every member of the Senate is in the millionaire class. This includes Bernie Sanders and Elizabeth Warren. Elizabeth Warren is worth over $11 million. Doesn't anybody ask why millions of dollars are spent in campaigns for the house and Senate for jobs that only pay $250,000 a year? Doesn't it strike you as being odd that most members of the House of Representatives, if they are not millionaires when they get to the house, they are millionaires by the time they leave?

In my later years I look at what is happening, and the more I learn, the more dismayed I am. I watch my nation overthrow the governments of other nations and completely obliterate the civilizations that these nations created. One must only must only look at Libya to see how much damage this nation has done. It seemed that every year this country has a new enemy. It seems that every year the American people are distracted by issues fomented by the people who supposedly represent us.

This is a never-ending stream of distractions to keep the American population focused on everything except what the government is doing behind our back. These issues supersede things such as the United States actively supporting a coup in Ukraine that deposed an elected government and ushered in a right-wing national socialist government that glorifies the Third Reich.

There seem to be many nations that are singled out by the United States as being "adversaries". These nations include Iran, Venezuela, North Korea, Syria and did once include Iraq and Libya. It seems an odd coincidence that all these nations were not members of the central banking cartel that seems to run the world. These nations are the only nations in the world that don't have a central bank. Libya and the Iraq chose not to deal in dollars for their oil and were promptly invaded. Venezuela nationalized their oil company and booted out Texaco and Chevron. Iran nationalized their oil fields and the CIA funded a revolution and installed the repressive regime of the Shah. The list of crimes that the American government has committed since the end of World War II is too long to put in this article, but the American public looks on their government and believes that we have the moral imperative and we are "a special" people that the world needs to look after them.

It doesn't matter that we kill millions of Vietnamese, Cambodians and millions Iraqi citizens and destroyed countries like Libya, and we look at America as the gold standard of planet Earth.

Meanwhile back at home in the United States, some people must use much of their paycheck just to ensure their health coverage and must get a second job to make ends meet. This isn't a supposition, I've met people that had to do this. The middle class in America has had stagnant wages since 1970 while the richest Americans are making more money than they have ever made. We watch as firms like Walmart pay their employees so poorly that they qualify for food stamps and Medicaid and this is done on purpose and the Corporation and even instructs their employees on how to apply for government assistance. The fact is, that we are subsidizing the richest company in United States, and the American people don't demand that this change. To date, the median income in the United States adjusting for inflation has declined since the 1950s yet productivity has risen dramatically. What could possibly be the reason for this?

This situation isn't going to change anytime soon when we have only the wealthiest of Americans running our government. These people don't want change, but they want you to think they do. When will Americans see through this charade and do something? Are the American people just supposed to go along to get along? Does anyone really care about the state this nation is in? Are we going to just listen to the corporate owned media that provokes dissension and divisiveness? The mainstream media outlets are owned by the same corporate entities that own the House of Representatives and the Senate in the Congress of the United States. The Democrats pretend to be the party of the working man, yet every member of the Senate who's a Democrat is a millionaire. As George Carlin once said: "The fix is in its a big club and you ain't in it."

Just maybe, people will wake up and understand that every citizen in this country is part of the problem. We won't fix it today and we won't fix it tomorrow because the corporations and the wealthy have total control of the American government. The defense contractors and the corporations will constantly plot to divide us, as they poison the planet and kill people with impunity around the world. The United States is becoming a pariah in the eyes of the world and nobody seems to notice

There are things that can be done, but only if the American people would wake up and smell the coffee. We can stop electing Democrats and Republicans in the house and Senate and demand that the electoral college be abolished, and the president is elected by popular vote. We can demand that third-party candidates are not shut out of debates not only for the presidency but also for the house and Senate.

Related Topic(s): America; Democrats; Employees; Equal; Government; Iran; Iraq; Media; Military; Money; (more...) People; Prosecution; Provocation; Stand Your Ground Law; Television; Work, Add Tags  (less...)
Add to My Group(s)
Go To Commenting
The views expressed herein are the sole responsibility of the author and do not necessarily reflect those of this website or its editors.