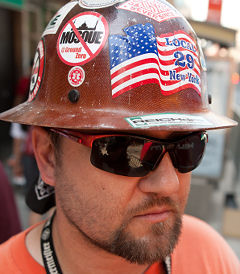 I've always believed in unions. I come from a long line of union members: steel workers, sanitation workers, office workers, police, fire, you name it. They're all in my family. My American family typifies the American working class. In fact, if all the unions represented by my family were to strike for a week, the whole country would suffer. Construction would stop. Crime would go undeterred. Fires would go unextinguished. And in my case, students would go untaught. Yes, I, too, am a union member. I'm a teacher.

Right now, America's unions are under fire. Millions of workers are unemployed and companies large and small are suffering. Business owners would love nothing more than to bypass unions to use lower wage, uninsured personnel. Given the opportunity, unemployed non-union labor would replace union workers in a New York second for the same jobs at lower wages with no benefits. In today's fragile economy, the only lovers of unions are the union members themselves.

Given how unpopular unions are, one would think union members would be extra careful to be welcoming, congenial, considerate and non-ideological with potential employers when jobs are on the line. All types of businesses and individuals contract with unions; from those held in the highest esteem, to those of ill repute. With such a diversity of contractors, not every union member feels kinship with those who foot their bills. Not every cop or fire fighter coalesces with the person and business s/he's assigned to protect, but s/he protects them just the same.

Educators can't choose not to teach certain pupils simply because they don't want to. Black, white, hispanic, asian, jewish, catholic, muslim, buddhist, bipolar, down-syndrome, hyperactive students all deserve education. Teachers unions don't boycott specific groups of students because they don't like their sect or color, or because they're somehow reminiscent of a painful past. If that should happen - if unions and union members should be so self-serving, unprofessional, prejudiced and juvenile to use criteria like ethnicity, religion, race, disability or reminiscence to defer services - those unions and union members should be stripped of union privileges and forfeit their jobs to those who prize propriety. Unions are contracted because of skills and compliance with rules and regulations - not because of bias and ideology. The only ideology acceptable for a union should be dedication to the excellent performance of one's job.

Of course there are legitimate circumstances where unions are correct in refusing contracts and in making demands in the interest of their rank and file. Members' health and safety are of paramount importance. No effective or worthwhile union should accept unsafe working conditions or an unhealthy workplace. Abuse of workers should never be tolerated. Unions exist to negotiate the best possible work environment and compensation for their members. However, nowhere do unsubstantiated fear, contempt for religion, or resurgent memory factor into union contracts as negotiable provisions for worker rights and protection. Such issues are frivolous, unprofessional, and unworthy of consideration; except of course if a worker's emotional or psychological state as a result of such fear renders him legitimately unable to perform. That's another matter.

The New York Daily News is reporting that union construction workers are refusing to build the Manhattan mosque to be located two blocks from Ground Zero. This is ideological impropriety that union leadership should cease immediately. It's bad enough that only 41% of Americans had a positive view of unions prior to this unfounded anti-Muslim tantrum. Adding cultural and religious bias, logistic sensitivity and unfounded fear to the existing union stereotypes of over-coddled and over-paid, affords union detractors greater ability to incite anti-union sentiment with new pejoratives like hyper-sensitive, hysterical, illogical and emotionally weak.

Those union members vowing not to work on the mosque may believe they're taking principled stands, but what they're really doing is exhibiting unnecessary fear and being emotionally and mentally weak.

Honestly, just how weak can we Americans be? We flatten other nations to the ground. We decimate their schools, hospitals, hotels, apartment buildings, playgrounds and businesses. We kill and maim babies, children, teens, the elderly, women, men and animals. We destroy entire cities with aerial and ground attacks using weapons of mass destruction that sometimes last for weeks, without a second's consideration for the suffering we cause. But we Americans can't tolerate the terrible memories of one horrible day nearly a decade ago.

Believe me, I don't mean to sound callous or disregard the horrors of September 11th. I had a close family member in the towers in 1993 and 2001 who escaped unharmed both times. I have first responder family who were on the ground in the aftermath of the attacks. I grew up in Rockaway Beach, New York, home to many first responders. I was devastated by the events of September 11th. I understand.

But considering what we've done to the people and infrastructures of Iraq and Afghanistan who did NOTHING to us, we really have little to complain about. We lost two buildings and 3,000 innocent people in New York City, but we've destroyed two countries and over a million people in return. Can't anyone see that in comparison our casualties and suffering, painful as they are, actually pale in comparison?

We send children to bed in Iraq, Afghanistan and Pakistan every night, terrified of America's bombs, yet macho men in hard hats can't overcome their memories? Come on, union members. You're stronger and better than that! Don't succumb to your weakness. Stand tall in your strength. You can do this project. You can build this mosque. Just do it!

The New York Daily News further reports that Andy Sullivan, a construction worker from Brooklyn, has started the online petition drive "Hard Hat Pledge," which asks others to vow not to work on the mosque if it stays in its current Park Place location. Sullivan says:

"Thousands of people are signing up from all over the country. People who sell glass, steel, lumber, insurance. They are all refusing to do work if they build there" [Park Place]. Hopefully, this will be a tool to get them to move it. I got a problem with this ostentatious building looming over Ground Zero."

The Daily News also reports on a Manhattan construction worker, L.V. Spina, from my old neighborhood of Rockaway Beach, NY. Mr. Spina told The News he'd be fine if the mosque were built next to his house in Rockaway Beach but not near Ground Zero. Somehow I have a problem believing that.

Related Topic(s): Fear; Ground Zero; Ground Zero Mosque; Ideology; Iraq; Union Activism; Union Membership; Union-Worker Issues-Labor; Weapons; Work, Add Tags
Add to My Group(s)
Go To Commenting
The views expressed herein are the sole responsibility of the author and do not necessarily reflect those of this website or its editors.