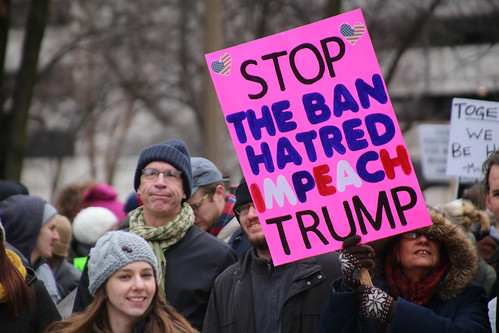 Is it impeachment yet? Last week we posited the possibilitythat the mean tangerine is deliberately trying to get impeached so he can get back to the business of tower-building and p*ssy-grabbing. That was before we discovered that he called Comey a "crazy nutjob"to Russian foreign minister Sergey Lavrov and ambassador Sergey Kislyak in the Oval Office on May 10, the day after he fired Comey.

Today the Washington Post reports that Trump asked his intelligence chiefs to back off on the Russian collusion investigation after Comey revealed it's existence in Congressional hearings. Can you imagine what the Neocons in Congress would be saying if this was Barack Obama? They'd try to have him executed. Here's more:

President Trump asked two of the nation's top intelligence officials in March to help him push back against an FBI investigation into possible coordination between his campaign and the Russian government, according to current and former officials.

Trump made separate appeals to the director of national intelligence, Daniel Coats, and to Adm. Michael S. Rogers, the director of the National Security Agency, urging them to publicly deny the existence of any evidence of collusion during the 2016 election.

Coats and Rogers refused to comply with the requests, which they both deemed to be inappropriate, according to two current and two former officials, who spoke on the condition of anonymity to discuss private communications with the president.

Trump sought the assistance of Coats and Rogers after FBI Director James B. Comey told the House Intelligence Committee on March 20 that the FBI was investigating "the nature of any links between individuals associated with the Trump campaign and the Russian government and whether there was any coordination between the campaign and Russia's efforts."

Trump and his allies in Congress have similarly sought to deflect scrutiny over Russia by attempting to pit U.S. intelligence agencies against one another.

In December, Trump's congressional allies falsely claimed that the FBI did not concur with a CIA assessment that Russia intervened in the 2016 election to help Trump win the White House. Comey and then-CIA Director John Brennan later said that the bureau and the agency were in full agreement on Moscow's intentions.

If that's not bad enough, before he was fired, Comey was asked to drop the investigation against Michael Flynn:

In addition to the requests to Coats and Rogers, senior White House officials sounded out top intelligence officials about the possibility of intervening directly with Comey to encourage the FBI to drop its probe of Michael Flynn, Trump's former national security adviser, according to people familiar with the matter. The officials said the White House appeared uncertain about its power to influence the FBI.

"Can we ask him to shut down the investigation? Are you able to assist in this matter?" one official said of the line of questioning from the White House.

Is it possible Trump is actually psychically channeling Nixon? Speaking of Flynn, he's pleading the Fifth and refusing to turn over subpoenaed documents to Congress. Remember when some of Hillary's staff plead the Fifth? Trump said it was tantamount to their admission of guilt. Seems appropriate to apply that same logic here, right? I mean, if he has nothing to hide, right? Maybe he's trying to cover up the fact that he lied to the Pentagon about his ties to Russia. NBC News offers this:

Former National Security Adviser Michael Flynn appears to have lied to security clearance investigators by telling them he was paid by "U.S. companies" when he traveled to Russia in December 2015, according to a letter released Monday by the ranking Democrat on the House Oversight Committee.

"The Oversight Committee has in our possession documents that appear to indicate that General Flynn lied to the investigators who interviewed him in 2016 as part of his security clearance renewal," said Rep. Elijiah Cummings of Maryland in a letter to committee chairman Jason Chaffetz (R-Utah).

Kathy never expected a career in radio as a talk show producer. Born and raised in Atlanta, Georgia, Kathy was completing her nursing degree when in 2001 - in an emergency - she was asked to fill in as the producer of Mike's program. Within a few (more...)
Related Topic(s): Impeachment, Add Tags
Add to My Group(s)
Go To Commenting
The views expressed herein are the sole responsibility of the author and do not necessarily reflect those of this website or its editors.