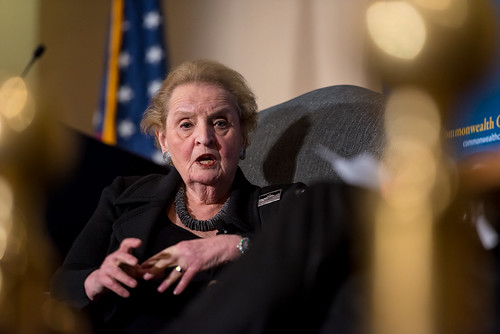 Madeleine Albright, without irony, has written a book on resisting Fascism. She has also published an op-ed in the New York Times pushing the same argument. Albright is alarmed and wants to warn the public to stop the fascism emerging under the Trump regime before it is too late.[1] Unfortunately, moralism on the part of the infamous and notorious is often the enemy of both historical memory and the truth, in spite of their newly discovered opposition to tyranny. It is hard to believe that a woman who defended the killing of 500,000 children as a result of the imposed US sanctions on Iraq can take up the cause of fighting Fascism while positioning herself (or being positioned by the mainstream media) as being on the forefront of resistance to US authoritarianism. Here is what David Rieff writing in the New York Times says about the sanctions Albright justified: "For many people, the sanctions on Iraq were one of the decade's great crimes, as appalling as Bosnia or Rwanda. Anger at the United States and Britain, the two principal architects of the policy, often ran white hot. Denis J. Halliday, the United Nations humanitarian coordinator in Iraq for part of the sanctions era, expressed a widely held belief when he said in 1998: 'We are in the process of destroying an entire society.' It is as simple and terrifying as that."[2] Is any policy worth the death of 500,000 children? She is not alone.

Hillary Clinton, known more politically as a former warmonger and an unabashed ally of the financial elite, has also resurrected herself as a crusader in fighting the creeping fascism that now marks the Trump regime. Speaking with Ngozi Adichie at the PEN World Voices Festival, Clinton appears to have completely removed herself from her notorious past as a supporter of the Iraqi war and the military-industrial-financial complex in order to sound the alarm "that freedom of speech and expression is under attack here in our own country" while further calling for numerous voices to make visible the creeping authoritarianism in America.[3]

This is an odd flight from memory into the sphere of moral outrage given her own role in supporting domestic and foreign policies both as a former first lady and as Secretary of State that refused to punish CIA torturers, lavished funds on the military war machine, shredded the federal safety net for poor people, and endorsed neoliberal policies that offered no hope and prosperity "for neighborhoods devastated by deindustrialization, globalization, and the disappearance of work."[4] No irony here. Just the opposite. Her critique of Trump's fascism does more than alert the public to the obvious about the current government, it also legitimizes a form of historical amnesia and a long and suppressed legacy of cruelty and human misery. She is not alone.

The U.S. and its Vichy Republican Party has drifted so far to the fascist right that people such as Albright and Clinton come across as the heroic vanguard of a political and ethical resistance to fascism. Under such circumstances, even some outspoken Republicans, again without irony, such as Flake, Corker and McCain are viewed in the mainstream press as principled heroes in spite of the fact that they have supported Trump's domestic and foreign policies, including his tax reform bill and his cruel and obscene budget, which not only offers $700 billion to the military but condemns millions of people to a life of misery and suffering. While the call to resist fascism is to be welcomed, it has to be interrogated and not aligned with individuals and ideological forces that helped put in place the racist, economic, religious, and educational forces that helped produced it.

I am not simply condemning the hypocrisy of mainstream politicians who are now criticizing the emerging fascism in the United States. Nor am I proposing that only selective condemnations should be welcomed. What I am suggesting is that the seductions of power in high places often work to impose a silence upon people that allows them to not only benefit from and become complicit with authoritarian tendencies and anti-democratic policies and modes of governance, but also once such people are out of power their own histories of complicity are too often easily erased, especially in the mainstream media. Regardless of such a newly found stance against fascism, such actions do nothing to help explain where we are and what we might do next to resist the fascism that has now engulfed American society and its economic, cultural, and political institutions.

What is often unrecognized in the celebrated denunciations of fascism by celebrity politicians is that neoliberalism is the new fascism. And what becomes invisible in the fog of such celebration is neoliberalism's legacy and deadly mix of market fundamentalism, anti-intellectualism, rabid individualism, white supremacy, toxic masculinity, and all embracing quest for profits.

The new and more racist, violent and brutalizing form of neoliberalism under Trump, has produced both a savage politics in the US and a corrupt financial elite that now controls all the commanding institutions of American society including the state. In other words, what disappears are the very conditions that have made possible a new and more feral American-style fascism. Systemic corruption, crassness, overt racism, a view of misfortune as a weakness, unapologetic bigotry, and a disdain of the public and common good has been normalized under Trump after gaining strength over the last 50 years in American politics.

Trump is merely the blunt instrument at the heart of a fascistic neoliberal ideology. We need to be wary, to say the least, about those mainstream politicians now denouncing Trump's fascism who while in power submitted, as Stanley Aronowitz puts it, "to neoliberal degradations of health care, jobs, public housing, and income guarantees for the long-term unemployed (let alone the rest of us)."[5]

What is often ignored in the emerging critiques of fascism is the history of neoliberalism's legacy coupled with the mainstream media's attempts to foreground many of its architects and supporters as celebrated opponents of Trump's fascist government. Trump is the extreme point of a long series of attacks on democracy and former politicians such as Albright and Clinton cannot be removed from that history. None of these politicians have denounced state violence, nationalism, the myth of American exceptionalism, and the forces that produce obscene inequality in wealth and power in the US, or the oppressive regime of law and order that has ruled America ruthlessly and without apology since the 1980s.

Unchecked and systemic power, a take-no-prisoners politics, and an unapologetic cruelty are the currency of fascism because they are the wedge that makes fear visceral and violence more than an abstraction. This lethal combination is also a pathological condition endemic to brutal demagogues such as Trump. They demand loyalty not to an ideal that expands the meaning of justice and democracy but loyalty to themselves, one that stands above the truth and rule of law. As The Economist points out, "Trump demands loyalty to himself and to the prejudice and rage which consume the voter base that, on occasion, even he struggles to control. In America that is unprecedented and it is dangerous."[6]

This combination of a demand to an insular notion of loyalty and their penchant for cruelty offers them not only a terrifying symbol of their unchecked power but also the emotional rush that may provide one of the few options for them to feel any emotion at all. Cruelty also feeds on irony and cleanses the past of the conditions that allow the mobilizing passions of fascism to bloom. The call to resist fascism is welcome but also complicated and cannot be separated from acts of bad faith that cleanse the historical record of the forces that helped produce it. The public imagination withers under the assault on historical consciousness and the institutions that nurture it.

The fight against fascism is part of a struggle over memory and those critical narratives that refuse to be couched in a form of historical and social amnesia. It is also a fight over the public spheres and institutions that make civic literacy, the public imagination, and critical consciousness possible. This suggests both a struggle to reclaim historical consciousness and to expose the forces that are and have been complicit with the long standing attack on democratic institutions, values, and social relations, especially those that now hide their past and ideological convictions in the purifying discourse of outrage, disingenuousness, and resistance.

Any resistance to fascism has to be rooted in the call to make education central to politics with a strong emphasis on the teaching of historical consciousness and civic literacy as crucial weapons in the fight against fascism. At the same time, such a fight must take as an unwavering standpoint in its refusal to equate capitalism and democracy. Such a battle has to be waged in diverse struggles that can be aligned through a common thread willing to recognize that we are at war over not just the right of economic equality and social justice but also against the powerful and privileged positions of whiteness, a toxic masculinity, and the elimination of the very notion of the social, solidarity, and compassion.

This is a war waged over the possibility of a radical democracy while acknowledging that the rich and powerful will not give up their power without a fight. Instead of listening to politicians and others deeply embedded in a system of exploitation, disposability, austerity, and a criminogenic culture, we need to listen to the voices of the striking teachers, the Parkland students, the women driving the me too movement, the Black Lives Matter movement, and others willing to make resistance visible, collective, and widespread. But we also need to connect these voices as part of a more comprehensive struggle against fascism and the diverse forms of repression that it produces.

Related Topic(s): Democracy; Education; Fascism; Inequality; Politicians; Resistance; Trump Bully In Chief; Trump Hypocrisy, Add Tags
Add to My Group(s)
Go To Commenting
The views expressed herein are the sole responsibility of the author and do not necessarily reflect those of this website or its editors.