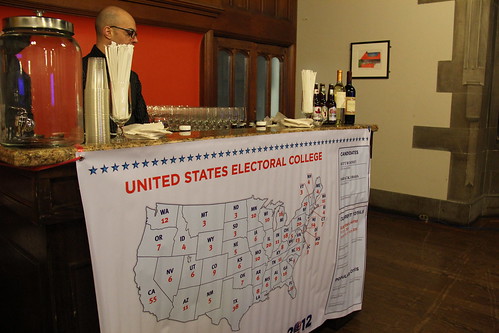 Map of the United States Electoral College
(Image by US Embassy Canada)   Details   DMCA
The Electoral College could undermine the will of the voters in the 2020 election as it did in 2000 and 2016, when George W. Bush and Donald Trump both lost the popular vote but won election. This had only happened three times before in the history of the United States, and the last time was 1888. The problem with having presidents who did not win the popular vote is that the policies enacted by those presidents are likely to represent the citizens who voted for them, rather than the majority of Americans. Minority rule is undemocratic.

The Electoral College was created as a compromise between one group of Founding Fathers (the Anti-Federalists) who thought that the president ought to be elected by a direct vote by the people and the other group (the Federalists), who did not think that the masses had the education and the temperament to be trusted with such an important decision. Although it seems ironic now, Federalist Alexander Hamilton argued that the Electoral College "affords a moral certainty that the office of President will never fall to the lot of any man who is not in an eminent degree endowed with the requisite qualifications." This argument is irrelevant today because electors no longer make their own decisions. They are chosen for their party loyalty by party conventions or party leaders. Although some of the Republican electors in 2016 may not have been big supporters of Donald Trump, and although there was an effort by some Clinton voters to urge them to prevent a Trump majority, there is no evidence that any electors in states won by Trump considered voting for anyone else.

The Electoral College was also an accommodation to the institution of slavery. If the United States had direct elections, the southern states would have been at a disadvantage, since their number of voters would have been smaller because slaves could not vote. However, the compromise that counted the slaves as three-fifths of a person when determining the number of electors put the South on a more equal footing with the North. This second justification for the Electoral College also no longer applies.

So we vote for electors and they vote for president. Each state chooses a total number of electors that equals that state's total of senators and representatives. There are 538 electors in total, corresponding to the 435 representatives and 100 senators in Congress, plus three electors for the District of Columbia.

Under this system, how much your vote will count depends on where you live. Your vote only counts toward the number of electoral votes that your state has. Alaska, Delaware, Montana, both Dakotas, Vermont, and Wyoming have three each. California has 55. But even if you live in a big state, your vote is still unlikely to count, because we also have a two-party, winner-take-all system. If your state votes Republican, your vote for a Democrat will not count, and vice versa. So, if you lived in Texas in 2016, all the electoral votes went to Trump, and if you voted for Hillary, your vote was completely wasted. On the other hand, if you lived in New York, your vote was also wasted. Since New York always votes Democratic, Hillary got all the electoral votes and did not need your help.

The only states in which your vote could have actually counted were the "swing states," which are the ones that are big enough to have substantial electoral votes and which do not always vote for the same party. If you live in Florida, Ohio, Pennsylvania, Michigan, Virginia, North Carolina, Colorado, Iowa, Nevada, New Hampshire, or Wisconsin, your vote can possibly make a difference. This is the reason that candidates campaign obsessively in those states and ignore the others. It was reported that Donald Trump and Hillary Clinton made more than 90% of their campaign stops in just 11 states, and of those stops, about two-thirds took place in the four states with the most electoral votes Florida, Pennsylvania, Ohio, and North Carolina.

The Electoral College also makes it easier to steal presidential elections. Instead of having to flip votes in all 50 states, it's only necessary to flip a few precincts in a few swing states.

It can be argued that, if there were no Electoral College, Democrats would have won all the elections in the 21st century because there are more registered Democrats than registered Republicans. Altogether, there are 31 states (plus the District of Columbia) with party registration; in the others, voters register without reference to party. As of 2018, 19 of those states and DC had more registered Democrats than Republicans. In 12 states, there were more registered Republicans than Democrats. In total, 40% of all voters in party registration states were Democrats, 29% were Republicans, and 28% were independents. This gave the Democrats an advantage of about 12 million voters . Going farther back in time, the Pew Research Center also shows a Democratic advantage in the years 1992 to 2016.

So, since the Electoral College works to the advantage of Republicans at this point in history, we can consider it very unlikely that Republicans would support abolishing it. Abolishing it would require a constitutional amendment, which would mean a two-thirds vote in both the House and the Senate and ratification by three-fourths (38) of the 50 states. Efforts to repeal the Electoral College in the past (1934, 1966, 1979) have always failed even though Gallup polling in 1948 showed that 56% of voters favored repeal. This number rose to 58% in 1967, and to 80% in 1968. After the undemocratic election results in 2000 and 2016, I imagine that most American voters favor repeal now, but the chances of repeal actually happening seem very slim.

However, there are some other options. It has been suggested that one way to make the Electoral College more democratic would be to require each state's electors to vote in proportion to the popular vote rather than winner-take-all. Under the winner-take-all system, all the state's electors are awarded to the candidate with the most votes statewide. This has the effect of maximizing that state's influence in the national election. However, two states, Maine since 1972 and Nebraska since 1996, use a different system, called the "congressional district method." They choose one elector for each congressional district, and that elector must vote according to that district's popular vote. In addition, they assign another two statewide electors who must vote according to the statewide vote. On the surface, this system sounds as though it would produce a fairer result. In fact, the results of this system would be even less fair, because so many congressional districts have been gerrymandered. Because Republicans controlled most state legislatures after the 2011 census, they were in charge of redrawing most of the congressional districts, and they drew them to favor Republicans. If all electors had been awarded based on the congressional district method, Mitt Romney would have won the election in 2012 even though Obama won 5 million more votes than Romney.

The good thing about these alternative systems is that citizens would have more incentive to vote. For example, if you are a Republican voting in California, your vote is wasted since California votes for Democrats. However, with a proportional distribution, your vote would be more likely to count, since all 55 electoral votes wouldn't automatically go to the Democrat. This also means that candidates would have reason to campaign in all 50 states instead of focusing exclusively on the swing states.

However, as we have seen, the proportional systems have substantial drawbacks. A third option appears more fair and more democratic: The National Popular Vote Interstate Compact (NPVIC). Under this plan, each state's electoral votes would be given to the winner of the national popular vote. So, since Clinton won nationally, all the states, even those like Alabama which vote solidly Republican, would have had to pledge its electors to her. This method would leave the Electoral College in place, so no constitutional amendment would be required, and elections would still be controlled by the states. But every vote would be equal, and every voter would matter in every state; we would achieve a national popular vote.

Janet Maker, Ph.D.is the owner of Janet's Good News, a daily newsletter featuring news that is good from a left-wing perspective. Subscribe at janetsgoodnews.org

Janet is also the author of "The Thinking Woman's Guide to Breast Cancer: (more...)
Related Topic(s): Election; Electoral College; Electoral College; Fair; President; Voting, Add Tags
Add to My Group(s)
Go To Commenting
The views expressed herein are the sole responsibility of the author and do not necessarily reflect those of this website or its editors.

The Truth About Cancer Charities and Pinkwashing

Hillary and the Lesser Evil