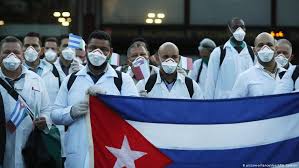 While those interviewed by Ms. Goodman called for early and affordable access to inoculations in the Global South, no mention was made of perhaps the most promising source of such therapies. The neglected source was not only promising, but implicitly revealed the swindle represented by Big Pharma's anticipated exorbitant prices for Covid-19 vaccines.

It may surprise readers to know that the source in question is Cuba.

In fact, Cuba is the first nation in Latin America to receive authorization from the World Health Organization (WHO) to perform officially sanctioned tests of the four vaccines it now has under development. Those trials have already completed their clinical stages. Promising results so far have Cubans looking forward to completing the (cost free) inoculation of its entire population of 12 million by the end of March 2021.

The vaccines under trial are named Soberana 01, Soberana 02, Abdala (CIGB66) and Mambisa (CIGB669). None of them is dependent for its preservation on super-cold temperatures.

Mambisa is worthy of special note, since as a nasal spray, it requires no needles, but responds locally to the specifically respiratory nature of Covid-19.

Failure to report such developments even on "Democracy Now" illustrates the complicity of our mainstream media in shunning any news from socialist nations like Cuba that might possibly illustrate the superior ability of their economies to deliver high quality, no-cost healthcare to citizens even during a worldwide pandemic. Moreover, absent the profit motive, Cuba will predictably deliver its vaccines to its neighbors at vastly cheaper prices than its capitalist counterparts.

This prediction is based on the fact that Cuba has long been a supplier of vaccines and doctors not only to the Global South, but to countries such as Italy during the height of Covid-19's first wave. Additionally, with its unequaled ratio of doctors to citizens, the island nation's response to the pandemic has effectively limited documented coronavirus infections despite supply problems caused by the continued U.S. embargo of the island.

All four developments (the superabundance of doctors, the relative control of Covid-19, Cuba's research capacities, and the export of medical care to other countries) result from the foresight and vision of Fidel Castro, the revered father of his country. In the early 1980s he sparked initiation of a vigorous homegrown biotech sector - largely to cope with the U.S. embargo's persistent attempts to deprive the island of medical supplies.

The result was the emergence of 20 research centers and 32 companies employing 20,000 people under the umbrella of the state-run BioCubaFarma Corporation. Recently, spokespersons connected with the corporation tweeted, "The #CubanVaccineCOVID19 is dedicated to the sower of dreams: Fidel. Our tribute to the one who believed in the strength and future of #CubanScience."

BioCubaFarma produces 8 of the 12 vaccines Cuba uses to immunize its own population against diseases such as measles and polio. Cuba has also exported hundreds of millions of vaccine doses to more than 40 countries (e.g. to deal with meningitis and hepatitis B).

All of this represents just one more illustration of socialism's comparative efficiency in the face of crises like the COVID-19 pandemic. Even a poor blockaded country like Cuba can respond to an unprecedented crisis such as the coronavirus without holding sick people hostage to the confiscatory demands of privatized natural monopolies like Big Pharma. The latter's claims to mammoth profits based upon (largely government-funded) costly research are simply ideological cover for unacceptable corporate greed.

People's vaccines can be produced at warp speed and at low cost - despite news blackouts even on "Democracy Now."