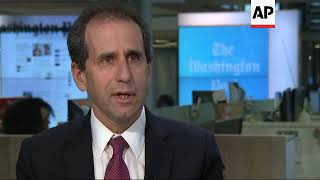 Readers of The Washington Post on Monday were treated to more of the same from editorial page chief Fred Hiatt. Hiatt, who won his spurs by promoting misleading "intelligence" about weapons of mass destruction in Iraq and suffered no consequences, is at it again.

This time he is trying to adjust to the fading prospect of a Deus ex Mueller to lessen Hiatt's disgrace for being among the most shameless in promoting the Trump-Russia collusion narrative.

He is not giving up. When you are confident you will not lose your job so long as you adhere to the agenda of the growing Military-Industrial-Congressional-Intelligence-Media-Academia-Think-Tank complex (MICIMATT if you will), you need not worry about being a vanguard for the corporate media. It is almost as though Hiatt is a tenured professor in an endowed chair honoring Judith Miller, the New York Times reporter who perhaps did most to bring us Iraqi WMD.

In his Monday column Hiatt warned: "Trump was elected with the assistance of Russian spies and trolls, which he openly sought and celebrated. But he did not (or so we are told) secretly conspire with them." In effect, Hiatt is saying, soto voce: "Fie on former (now-de-canonized) Saint Robert of Mueller; we at the Post and our colleagues at The New York Times, CNN et al. know better, just because we've been saying so for more than two years."

Times executive editor Dean Baquet said, about the backlash to the Times' "collusion" coverage: "I have no regrets. It's not our job to determine whether or not there was illegality." CNN President Jeff Zucker said: "We are not investigators. We are journalists." (One wonders what investigative journalist Bob Parry, who uncovered much of Iran-Contra and founded this site, would have thought of that last one.)

Hiatt's circular reasoning is all too familiar. It is the kind a former director of national intelligence excels at when he's not lying, sometimes under oath. For instance, James Clapper was hawking his memoir at the Carnegie Endowment last year when he was confronted by unexpectedly direct questions from the audience.

Asked about the misleadingly labeled, rump "Intelligence Community Assessment" (ICA) of Jan. 6, 2017, which he orchestrated, and which blamed Russia for interfering in the 2016 election, Clapper gave an ipse dixit response: The ICA simply had to be correct because that's what he had told President Barack Obama and President-elect Donald Trump.

In fact, that "Intelligence Community Assessment" stands out as the most irresponsible, evidence-free and at the same time consequential crock of intelligence analysis since the National Intelligence Estimate of Oct. 2001 claimed there was WMD in Iraq. Recall that that one was shaped by out-and-out fraudulent intelligence to "justify" an attack on Iraq six months later.

Sen. Jay Rockefeller (D-WV), as chair of the Senate Intelligence Committee, described the main thrust of the committee's five-year bipartisan report,stating, "In making the case for war, the [Bush] Administration repeatedly presented intelligence as fact when in reality it was unsubstantiated, contradicted, or even non-existent."

Hiatt was one of the media's major offenders, feeding on what the Cheney/Bush folks told him. When no "weapons of mass destruction" were found in Iraq, Hiatt conceded during an interview with The Columbia Journalism Review that, "If you look at the editorials we write running up [to the war], we state as flat fact that he [Saddam Hussein] has weapons of mass destruction " If that's not true, it would have been better not to say it." [CJR, March/April 2004] As Parry wryly observed at the time in a piece calling for Hiatt's dismissal, "Yes, that is a common principle of journalism, that if something isn't real, we're not supposed to confidently declare that it is."

The media set the prevailing tone the day after the ICA was published. The banner headline atop page one of the Times read: "Putin Led Scheme to Aid Trump, Report Says." That put in motion more than two years of Dick Cheney-like chicanery in the media.

Ray McGovern works with Tell the Word, the publishing arm of the ecumenical Church of the Saviour in inner-city Washington. He was an Army infantry/intelligence officer and then a CIA analyst for 27 years, and is now on the Steering Group of Veteran Intelligence Professionals for Sanity (VIPS). His (more...)
Related Topic(s): Congress; Deep State; Investigation; Media Bias; Media Washington Post; Misconduct, Add Tags
Add to My Group(s)
Go To Commenting
The views expressed herein are the sole responsibility of the author and do not necessarily reflect those of this website or its editors.