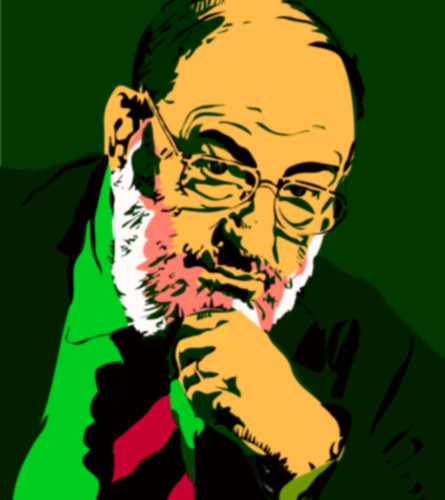 Father's and sons have been at it since the beginning of time -- since an outraged God told Adam to get out of Eden and take his side rib (Eve) with him, and go f*ck himself, after His Satan-driven brat ate of the iMac tree, and started thinking for himself; and Adam screamed back over his shoulder, "You go Yahweh and I'll go mine; and, He riposted to Them, "See ya, Totem and Taboo." They went into Exile, and many many many many many many illicit light thoughts later, to make a long story short, here we are.

When Umberto Eco died of complications from pancreatic cancer in Milan in 2016, many people felt as if they had lost a loveable father figure. With his trademark self-effacing humor, he honored the reader, which is to say he honored and fought for freedom of thought, and took the real value of a text away from what he called 'the imperial author' and ceded its interpretation to the reader. He was kinder than Yahweh that way. In a speech before PEN America in 2008, he spoke of his father's absence in his life. "I knew Stephen Daedalus better than my father," he begins. There were stories never told, emotions never felt, and his father drifted away, a ghost to him, before ever being fully realized.

Newly translated from Italian by Alastair McEwen, On the Shoulders of Giants is a series of twelve lectures Eco wrote for an annual cultural festival called La Milanesiana that commenced in 2000. It's deep dive into an array of esoteric, sublime, and sometimes scatological ideas that Eco manages to make accessible to intellectuals, wannabe intellectuals, and people who f*cking hate intellectuals but enjoy and playfulness. He's a semiotician interested in the signs and symbols of ancient Christianity; he's a linguist interested in how words communicate, identifying a triadic dialectic between the reader, the text, and the writer; and, he's a responsible relativist. The lectures cover three broad areas: relativism, aesthetics, and the duality of truth.

Eco begins his lecture series with "On the Shoulders of Giants," which is a much-trodden ground of inquiry, all kinds of homage parties have been thrown over the years: Where would we be if not for Heraclitus, Socrates, Plato, Aristotle, Galileo, Copernicus, Darwin, yada yada, and this is all meet and acceptable behavior, so let us carry on. What makes Eco's talks fun is his humor, penetrating insights and truly eclectic examples of topic points. He manages to make you feel that you're going on an esoteric adventure into secret spaces, rather than some Adventure World ride into over-structured sentimentality. In this first lecture, Eco reminds us that, postmodern or not, the age-old struggle with Daddy (patriarchy) continues, and we alternate between dwarfs and giants into the uncertain future.

Eco starts biblically. After the Flood, Noah got sh*t-faced, and took a nap, and, peeking in on Dad, Ham took note of his "nakedness" and tittered, some say like Eddie Murphy in Raw, who invited his brothers, Japheth and Shem, to check it out; instead, they grabbed a sheet and, walking backwards into the tent, they covered Dad and skedaddled, but their brother, still hamming it up, woke Dad from his wet dream, and all hell broke loose. "Imagine opposing one's father by mocking him," Eco tells us, "as Ham did when he couldn't overlook Noah's having a little wine after all that water"" Noah reacted by dropping the N-bomb and "exiling his disrespectful son"[and] descendants to thousands of years of endemic hunger and slavery." Poor Noah, said Polly to the cracker, who bequeathed us chain gangs and economic inequality.

After these two major over-reactions (Adam, Noah) to nakedness by father figures, Eco reminds us of how psychopathic old monotheism could be. God terrorizes Abraham to the point he's willing to cut the throat of his scapegoated kid, Isaac, to please the Old Man. (Actually, the whole vibe of this scene is captured perfectly by Dylan in Highway 61.) Eco tells us, "(Believing the son would die of a slit throat while the father earned the benevolence of Yahweh you cannot tell me the man was behaving according to our moral canons.) Luckily, Yahweh was joking -- but Abraham did not know that." f*cking Yahweh, right? Maybe he told the serpent to go Eve, just to see what would happen next.

These kinds of estrangements carry a lot of weight with Eco -- he traces these battles of fathers and sons, dwarfs and giants, from the Bible through to the rest of history. Copernicus, he says,

referred back to the thinking of Plato and Pythagoras...Kant needs Hume to awaken him from his dogmatic slumbers; the Romantics engage...the Middle Ages; Hegel explicitly sanctions the primacy of the new over the old...Marx, reinterpreting human history...[started with] the Greek atomists...Darwin kills off his biblical parents by making giants of the great anthropomorphic apes, on whose shoulders men came down from the trees to manage, still full of wonder and ferocity, that marvel of evolution that is the opposable thumb.

And later, that marvel of revolution, the middle finger.

Related Topic(s): Aesthetics; Author; BEAUTY; Civilization; God; Humor; Intellectuals; Light; Proportionality; Readers; (more...) Relativity; Representation; Shakespeare; Truth; Ugliness; Universe; Work, Add Tags  (less...)
Add to My Group(s)
Go To Commenting
The views expressed herein are the sole responsibility of the author and do not necessarily reflect those of this website or its editors.