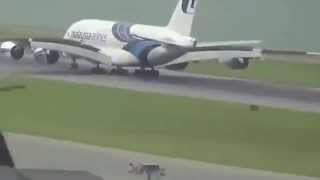 Anger, Agony and Disbelief as Malaysians Awake to News of MH17 shoot down in Ukraine.
(Image by You Tube)   Details   DMCA

298 Passengers and crew were murdered by Ukraine in order to create a propaganda attack on Russia. The filth that comprise the Western media and governments hid the truth for the sake of Washington's anti-Russian propaganda.

The security official says that his suspicions were aroused by "the amazingly prompt reaction of the Ukrainian leadership," which "indicated prior knowledge of the affair." Perhaps readers will remember that at the time I pointed out that the event was clearly staged as the same propagandistic accusation against Russia appeared everywhere instantly long before any investigation. Indeed, the investigation was stillborn as it could not be concocted to indicate Russia's guilt.

Don't be surprised. Western governments and media only lie. Never do they tell the truth. Remember: Russia-gate. Weapons of mass destruction. Iranian nukes. Assad's use of chemical weapons. Gulf of Tonkin. 9/11. Russian invasion of Ukraine. JFK assassination. MLK assassination. Bobby Kennedy assassination. Skripal poisoning. Maduro starving his own people. An endless list of lies. The entirety of the West is nothing but a lie factory.

Related Topic(s): Media; Mh-17 Airline; Propaganda; Ukraine, Add Tags
Add to My Group(s)
Go To Commenting
The views expressed herein are the sole responsibility of the author and do not necessarily reflect those of this website or its editors.