With the revelations by Lev Parnas (apparently backed up by all kinds of documentation, on paper, in emails, in texts, on cell phones, and etc.), that Trump was up to his neck in the Ukraine/Zelensky attempted extortion/bribery plot has become clear. (And remember, for both bribery and extortion to be crimes, one does not have to succeed, only try.) Parnas has already turned over all of this documentation to the House Intelligence Committee (and of course the Federal DOJ Southern District of New York has it as well).

Of course, do these reveals mean that McConnell will crack and admit anti-Trump's-case witnesses to the Senate Impeachment Trial? Well no. Does it mean that Susan Collins will not do her usual fade after saying that she would "consider all of the evidence" (and most recently saying that she might, well maybe she would, consider it, if the timing were right). Well, of course not. The Senator from Maine always fades, like the rays of the sun glinting off the slopes at Sugarloaf Mountain, ME, (where I skied in 1962, at that time riding the world's longest T-bar: 7000 ft.!) as it sinks in the West. In fact she has already announced that she likely will (fade).

But in this column, I am taking a step back, to 2014, and taking a look at the US-sponsored "regime change" in Ukraine that set up the current picture. There was at that time an elected President, Viktor Yanukovych . He was apparently quite corrupt and apparently incompetent as well. But he was the elected President. (Sound familiar?) Under Russia, physically as well as politically, at one point nevertheless he was open to attempting to negotiate Ukrainian entry into the European Union and possibly even NATO. (For the United States that latter would have been like Mexico joining some Russian-Chinese international military alliance. At that point Trump might actually read up a bit on U.S. history [OMG] and invoke the Monroe Doctrine.) But then, thinking better of it in terms of Ukraine's geo-poltical situation, Yanukovych started considering joining the Russian-led Eurasian Economic Union , something the U.S. under Obama didn't like so much. And that's when the current version of the Ukrainian "Great Game" got going again in earnest. 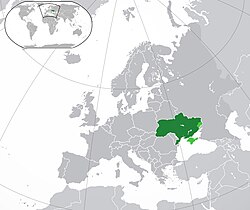 The current "Great Game" that is still being played in Ukraine --- the Trump bribery/extortion scandal aside --- began in the 1980s, when Ronald Reagan was leading what would turn out to be the final campaign of Western Imperialism's 75-Year War Against the Soviet Union. While Reagan was already in the early stages of Alzheimer's disease, he was surrounded by a cleaver bunch of handlers who a) made sure that the onset of his final illness would be concealed from the US public and perhaps even from Soviet Intelligence, and b) made sure that the US stayed on track for that final offensive.

Part of that final campaign was on the one hand to continue the heavy US military spending program, even throwing in the impossible-to-achieve "Star Wars" program (which would, if it had ever come to pass, given the U.S. First Nuclear Strike capability --- currently reactivated by Trump with the "Space Force" but not noticed much because of impeachment, the Trump Middle East Mess, and etc.), spending that the Soviet Union could never hope to match. At the same time a gullible Soviet leader Mikhail Gorbachev was being lulled into thinking that deals could be made which would allow the pressure to be taken of his country. Unfortunately for the Soviet Union as a nation-state, Gorbachev never did learn the real meaning of Reagan's constantly stated mantra, which he used when talking about dealing with the Soviet Union: "trust but verify." That is that for Reagan, it only went one way.

George H.W. Bush became President when the Soviet Union, under increasing military-spending pressure from the United States, was entering the final throes of its death as a nation-state. Part of the plan of Western imperialism was to undermine not only socialism in the Soviet Union, but whatever state power was held in the Soviet Bloc nations, not, surely, by truly Communist Parties, but by the variety of governments which nevertheless were beholden in one way or another to the Soviet Union. Among them, the East German government came to be on shakier and shakier ground. Eventually, reunification with the much more prosperous West Germany (whose destroyed industry after World War II had been very quickly restored by the US under the "Marshall Plan," which sent no aid any further east than the Elbe River) and the end of the German Democratic Republic (GDR) became inevitable.

Reagan and Gorbachev hold discussions. And Gorbachev was snookered.
(Image by (Not Known) Wikipedia (commons.wikimedia.org), Author: Author Not Given)   Details   Source   DMCA

The only obstacle to that occurrence was the presence of about 300,000 troops of the Red Army in the GDR. Gorbachev agreed to remove them, allowing German re-unification. In return, he received a promise from G. H.W. Bush that while the re-united Germany would belong to NATO, there would be no expansion of NATO eastward. Unfortunately for the Soviet Union and the successor state of Russia, Gorbachev trusted the West but did not demand verification (see the note above). No such treaty or even agreement was ever put on paper and signed by all parties concerned. And thus we have the origins of the current situation in Ukraine.

Led by US imperialism under Pres. Clinton, NATO did expand eastwards, right up to Russia's borders, with the Baltic countries, Poland, Slovakia, Hungary, and Romania as members. Recall that NATO was formed specifically as a US-led military alliance against the Soviet Union in 1949, and its charter requires that an attack on any member be regarded as an attack on all. Thus the only major part of Russia's western border that is not with a NATO country is that which is with Ukraine. And, coming down the present, the ever-expanding capitalist imperialism of the US had set its sights on it.

Steven Jonas, MD, MPH, MS is a Professor Emeritus of Preventive Medicine at StonyBrookMedicine (NY) and author/co-author/editor/co-editor of over 35 books. In addition to his position on OpEdNews as a "Trusted Author," he is a Senior Editor, (more...)
Related Topic(s): Bush; Crimea; Gorbachev; NATO; Trump; Ukraine; Vladimir Putin; Yanukovych, Add Tags
Add to My Group(s)
Go To Commenting
The views expressed herein are the sole responsibility of the author and do not necessarily reflect those of this website or its editors.