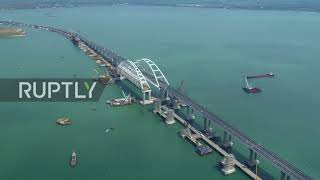 By now many, most people have at least heard about the naval incident in the Kerch Strait between Ukrainian naval vessels and those of Russia that occurred last weekend.

Russia controls the Strait which lies between Crimea and the Russian mainland. It separates the Black Sea from the Sea of Azov.

"Ships passing through the Kerch Strait between Russia's mainland and Crimea are obliged to notify Russian maritime controls of passage".

The Ukrainian ships did not notify Russian maritime officials before entering the Strait and were intercepted by Russian coast guard ships and the crews detained.

Russia claims the incident is a provocation committed by the government of Ukrainian President Petro Poroshenko.

At a "United Nations Security Council emergency meeting on Monday, the US, Britain and France pointedly refused to take on board Russia's legal argument for why it felt obliged to detain the Ukrainian boats and 24 crew. The Western powers automatically sided with the version of events claimed by President Petro Poroshenko-that the Ukrainian Navy was attacked unlawfully by Russia"... and "the US, EU and Nato denounced Russia's 'aggression' and demanded that the Ukrainian vessels and crews be repatriated immediately".

Of course this alleged Russian "aggression" against Ukraine by the US, Britain and France goes back to their claim Russia illegally annexed Crimea rejecting the referendum initiated by Crimean officials where the people voted overwhelmingly to join the Russian Federation. This occurred a month after the February 2014 coup of legitimately elected Ukrainian President Viktor Yanukovych that was orchestrated by US backed neo-Nazi militants in Kiev. The Crimean's were having none of it and chose to secede from Ukraine.

A little history. Crimea had been a part of Russia for hundreds of years. After the 1917 Russian revolution then in 1921 Crimea became a separate republic within of the Soviet Union. In 1954 Soviet Premier Nikita Khrushchev made Crimea a part of the Ukraine republic-a sort of gift to his home republic-but merely a formality as Crimea and Ukraine remained within the Soviet Union. Then with the demise of the Soviet Union in 1991 Crimea remained a part of the newly independent country of Ukraine. But with the creation of the new Russian Federation and its Black Sea Fleet stationed in Crimea a 45 year lease agreement was arranged with the Ukraine government for the fleet to legally operate in the peninsula. Obviously after the 2014 Ukrainian coup Russian troops legally stationed there provided a calming presence as the post coup regime said the Russian language would no longer be recognized in Ukraine. Yet in Crimea the majority of people were ethnic Russians with Russian as their native language. Thus alarmed over the coup the aforementioned referendum was held and the Crimean people essentially chose to rejoin with their native Russia.

Getting back to the incident in the Kerch Strait two questions remain:

Poroshenko is up for re-election in March and supposedly trails in the polls. Did he alone precipitate this "wag the dog" type incident to boost his ratings and get the US and its Nato allies to side with him, get them involved and condemn the Russian's as aggressors?

Or was the CIA and Britain's MI6 in the background urging him to create the naval incident in order to continue the Putin, Russia bashing?

The primary concern is provocative incidents such as this can lead to war. Not against some 3rd rate country that can't defend itself but a Russian nuclear weapons superpower that if attacked on its territory will retaliate and the consequences could lead to the unthinkable.

Do the crazed neo-cons particularly National Security Adviser John Bolton, Vice President Mike Pence and Secretary of State Mike Pompeo all in Trump's ear plus the Beltway pundits luxuriating in their think tanks in and around "official" Washington realize this? That provoking the Russian bear is not only dangerous but deadly?

Retired. The author of "DECEIT AND EXCESS IN AMERICA, HOW THE MONEYED INTERESTS HAVE STOLEN AMERICA AND HOW WE CAN GET IT BACK", Authorhouse, 2009
Related Topic(s): Crimea; Navy; Provocation; Russia Bashing; Ukraine, Add Tags
Add to My Group(s)
Go To Commenting
The views expressed herein are the sole responsibility of the author and do not necessarily reflect those of this website or its editors.