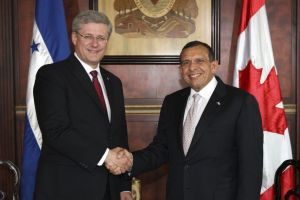 In 1901, US author O. Henry coined the term "banana republic" to describe Honduras, which was dominated by the US-based United Fruit Company. "Typically," Henry wrote, "a banana republic has a society of extremely stratified social classes, usually a large impoverished working class and a ruling-class plutocracy, composed of the business, political and military elites of that society."

Not much has changed in the past 120 years, although the Ugly American has been joined at the ruling class table by the Ugly Canadian.

Ten years-ago today Ottawa tacitly supported the Honduran military's removal of elected president Manuel Zelaya. During the past decade Canada has strongly allied itself to those backing the coup who continue to rule the Central American country.

It was not until basically every country in the hemisphere denounced the June 28, 2009, coup that Ottawa finally did so but Canada did not explicitly call for Zelaya's return to power. On a number of occasions Minister of State for the Americas Peter Kent said it was important to take into account the context in which the military overthrew Zelaya, telling the New York Times: "There is a context in which these events [the coup] happened."

In the lead-up to his ouster Ottawa displayed a clear ambivalence towards Zelaya. Early in June Kent criticized Zelaya, saying: "We have concerns with the government of Honduras." The Conservatives opposed Zelaya's plan for a binding public poll on whether to hold consultations to reopen the constitution, which had been written by a military government.

A week after the coup, during which Zelaya was flown to Costa Rica, the elected president tried to return to Honduras along with three Latin American heads of state. But the military blocked his plane from landing and kept over 100,000 supporters at bay. In doing so the military killed two protesters and wounded at least 30. On CTV Kent blamed Zelaya for the violence. Just before the elected president tried to fly into Tegucigalpa, Kent told the OAS the "time is not right" for a return, prompting Zelaya to respond dryly: "I could delay until January 27 [2010]" (when his term ended). Two weeks after trying to return by air Zelaya attempted to cross into Honduras by land from Nicaragua, which Kent once again criticized.

Despite the coup, Ottawa refused to exclude Honduras from its Military Training Assistance Program. Though only five Honduran troops were being trained in Canada, failing to suspend relations with a military responsible for overthrowing an elected government was highly symbolic. More significantly, Canada was the only major donor to Honduras the largest recipient of Canadian assistance in Central America that failed to sever any aid to the military government. The World Bank, European Union and even the US suspended some of their planned assistance to Honduras.

In response to the conflicting signals from North American leaders, the ousted Honduran foreign minister told TeleSur that Ottawa and Washington were providing "oxygen" to the military government. Patricia Rodas called on Canada and the US to suspend aid to the de facto regime. During an official visit to Mexico with Zelaya, Rodas asked Mexican president Felipe Calderon, who was about to meet Stephen Harper and Barak Obama, to lobby Ottawa and Washington on their behalf.

The November 2009 election was boycotted by the UN and OAS and most Hondurans abstained from the poll. Despite mandatory voting regulations, only 45 percent of those eligible cast a ballot (it may have been much lower as this was the government's accounting). Still, Ottawa endorsed this electoral farce. "Canada congratulates the Honduran people for the relatively peaceful and orderly manner in which the country's elections were conducted," noted an official statement. While most countries in the region continued to shun post-coup Honduras, Ottawa immediately recognized Porfirio Lobo after he was inaugurated as Honduran president on January 27, 2010. Not long after, Canada negotiated a free trade agreement with Honduras.

Particular corporate interests and regional integration efforts motivated Ottawa's hostility towards Zelaya. A number of major Canadian corporations, notably Gildan and Goldcorp, were unhappy Zelaya raised the minimum wage and restricted mining operations. Rights Action uncovered credible information that a subsidiary of Vancouver based Goldcorp provided money to those who rallied in support of the coup. Additionally, a year before the coup Honduras joined the Hugo Chavez led Bolivarian Alliance for the People of Our Americas (ALBA), which was a response to North American capitalist domination of the region.

Lobo's successor as president came from his right-wing National Party. Juan Orlando Hernandez (JOH) won an election marred by substantial human rights violations targeting the Libre party, which put forward Zelaya's wife Xiomara Castro for president. In 2017 JOH defied the Honduran constitution to run for a second term. At Hernandez' request the four Supreme Court members appointed by his National Party overruled an article in the constitution explicitly prohibiting re-election. (The removal of Zelaya was justified on the grounds that he was seeking to run for a second term despite simply putting forward a plan to hold a non-binding public poll on whether to hold consultations to reopen the constitution.) JOH then 'won' a highly questionable poll. With 60 per cent of votes counted opposition candidate Salvador Nasralla lead by five-points. The electoral council then went silent for 36 hours and when reporting resumed JOH had a small lead. The Canadian government endorsed this electoral farce and accepted the killing of at least 30 pro-democracy demonstrators in the weeks after the election.

Over the past decade Ottawa has reinforced Honduran impoverishment and political dysfunction. The corporations, their paid lobbyists and the politicians who follow their orders clearly prefer this status quo.