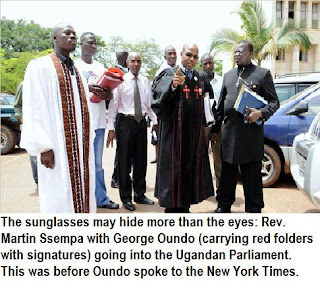 Rev. Martin Ssempa may have a hard time getting his beloved "kill the gays" bill passed, even though he's tried for years to have Ugandan homosexuality criminalized and some gays put to death. Last week, it seemed that, with the help of Ugandan legislator, David Bahati, the bill would surely go through Parliament, but there were rumors that the bill would be killed. Yesterday, taking matters into his own hands, Ssempa brought what he said were two million signatures in support of the bill and even brought two "ex-gays" to testify how they had been indoctrinated by slain gay activist David Kato.

The two "ex-gays," Paul Kagaba and George Oundo summarily spoke to speaker of Parliament, Edward Kiwanuka Ssekandi in the company of Ssempa and Bishop Julius Oyet. They both related how they were "indoctrinated" by Kato by being raped by him after which  both became gay activists for a time until brought under the pastoral influence of Ssempa.

Ssempa, it seemed, had made his final, definitive argument for the (now internationally infamous) "kill the gays" bill.

Then an hour later, George Oundo was able to speak to the New York Times:

"David Kato was murdered; it was a plot," Mr. Oundo said. "I don't support the bill."

I've always been gay," Mr. Oundo said, in a timid but growing voice. "I didn't choose it."

"David Kato was the first one who taught me to protect my human right," Mr. Oundo added.

Mr. Oundo said that his presence alongside Mr. Ssempa at Parliament had been to "protect" himself and that he had been contacted only that morning by Mr. Kagaba about the meeting and offered about $42 to attend. He said Mr. Ssempa had offered him about $2,000 in 2009 to repent and switch sides in the debate, but later reneged. Either way, Mr. Oundo became a poster-child for Mr. Ssempa's anti-homosexuality movement.

Martin Ssempa is an enigma of sorts: his siblings died of AIDS and he told himself that it was their promiscuity that caused their death. At the time, he was a celebrity: a national break dancing champion. He eschewed fame for membership in a local Baptist Church and performed in plays to educate students about AIDS. He studied sociology and received a Masters of Arts Degree at Philadelphia Biblical University. NOTE: there is no reference to Mr. Ssempa ever receiving a Masters of Divinity from PBU or any other institution. His own website DOES NOT MENTION ORDINATION OF ANY KIND, yet he insists on being called "Pastor" and dons all the trappings of ordained clergy (see picture above).

Ssempa also gained some international influence by working with George W. Bush's PEPFAR (President's Emergency Plan for AIDS Relief) and Pastor Rick Warren's Saddleback Church. It should be noted that, for some unknown reason, the two had a falling out and Warren has since distanced himself from Ssempa.

Rev. Dan Vojir is has been writing/blogging on religion and politics for the better part of ten years. A former radio talk show host (Strictly Books " Talk America Radio Network) and book publisher, Dan has connected with some of the most (more...)
Related Topic(s): Anti-gay; Bribery Influence Peddling; David Kato; Extortion; Fraud; Gay Bashing; Gay Equality; Kill A Queer For Christ; Kill-the-gays Bill; Lou Engle; (more...) Martin Ssempa; Rick Warren; Uganda, Add Tags  (less...)
Add to My Group(s)
Go To Commenting
The views expressed herein are the sole responsibility of the author and do not necessarily reflect those of this website or its editors.