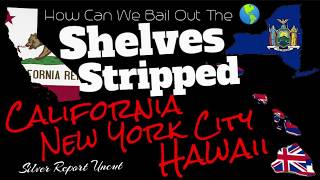 The Panic Buying Begin's As Costco Shelves Stripped In NYC, San Francisco, Seattle, Hawaii etc... This has begun to escalate quickly as panic buying hits the US beginning at Costco, Sam's club, and other box stores across several major US cities including
(Image by YouTube, Channel: Silver Report Uncut)   Details   DMCA

Experts are warning that within two to four weeks the United States will find itself facing a full-blown pandemic caused by the COVID 19 coronavirus.

We often hear mindless propaganda from conservative and liberal politicians alike declaring the the US has "the best health care system in the world."

It may be true that the rich can get the best care in the world, but the truth is that ours is a terrible system because it is virtually unavailable to the 30 million Americans without health insurance and to the 50 million more Americans who only have basically useless insurance that has outrageously high deductibles the money of your own that you have to spend for doctors, treatment and even hospitalization before your policy starts to cover you. These deductibles can range from $2000 per year or on up past $6000 per year.

For families and even individuals living paycheck-to-paycheck who have at best a few hundred bucks in the bank, it's simply not possible to come up with the $75 or more it can cost to see a doctor or, if no doctor is available in a crisis, the $200 it can cost to go to an urgent care center.

The result of this situation is that many Americans just don't get seen if they get sick. Only when they are so ill that they have to go to a hospital emergency room do they get to see a doctor, and if they can get admitted at that point (some hospitals turn people away without insurance or ready cash) their care is hugely expensive because they're receiving it so late.

That's bad enough if a person has pneumonia, a heart attack or something like a serious ulcer, but when they've contracted a potentially fatal and highly contagious pandemic disease for which there is no easy cure, it is a social and national catastrophe, not "just" a personal one.

Confronted with a looming epidemic, what you want is for everyone in a society to have ready access to free testing to see if their symptoms indicate that they have the disease, and that if they do, for them to have access to prompt treatment and medication to minimize the risk that they will spread that disease to others or get a serious complication themselves.

As things stand, at least 80 million Americans about one in four of us don't have that.

But it gets worse. More than a hundred million of the poorest Americans these days, when they have employment, typically work in the service sector, where they perform jobs that put them in close contact with many people. Most such people work at minimum wage or close to it and a majority do not even get sick days. Even those who do often don't get paid for days they stay home because of illness"