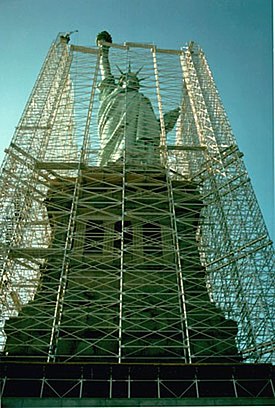 Are you free to express your opinions? The First Amendment says yes, but 8 US Code § 1324 says no. A case currently before the US Supreme Court, United States v. Sineneng-Smith, will presumably clarify the matter, hopefully in favor of free speech.

Evelyn Sineneng-Smith, an immigration consultant, allegedly cheated her clients by charging them $5,900 to file applications for a permanent residency program she knew they didn't qualify for.

Under that US Code provision, "Any person who ... encourages or induces an alien to come to, enter, or reside in the United States, knowing or in reckless disregard of the fact that such coming to, entry, or residence is or will be in violation of law," can be sentenced to hard time -- five years in prison, ten years if it's for financial gain, life imprisonment or even execution if someone is injured or put in jeopardy of death by that "encouragement."

The US Court of Appeals for the Ninth Circuit set aside Sineneng-Smith's convictions on those "encouragement" counts, ruling that the law is "unconstitutionally overbroad in violation of the First Amendment."

Federal prosecutors appealed the Ninth Circuit's ruling to the Supreme Court because that's what federal prosecutors do . Their case seems to be that we obviously can't just have people out there saying whatever they want to say.

But we CAN, and SHOULD -- in fact, according to the Constitution, MUST -- have people out there saying whatever they want to say.

I encourage anyone and everyone who wants to come to the United States in search of work and/or safety to do so, and to stay here for as long as they please, whether the US government likes it or not.

I just broke the law.

And I did so partly for purposes of "commercial advantage or private financial gain." I consider unfettered immigration an economic boon to everyone, myself included.

The Supreme Court should affirm the Ninth Circuit's ruling.

If it doesn't, I guess you'll be waiting ten years or so for my next column.

Related Topic(s): Freedom Of Speech; Immigration, Add Tags
Add to My Group(s)
Go To Commenting
The views expressed herein are the sole responsibility of the author and do not necessarily reflect those of this website or its editors.