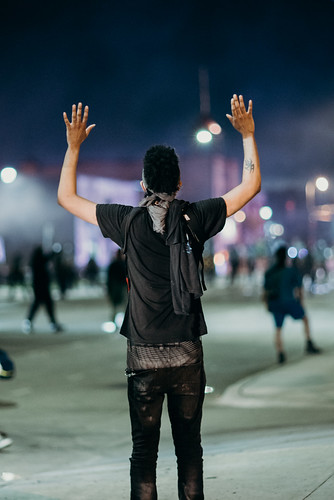 In the United States, one city after another goes up in flames, as African-Americans and other protesters are battling the police, even the National Guard, while protesting against the continuous brutal killings of black people, in all parts of the country.

The spark came, as Mr. George Floyd in Minneapolis, was killed, literally choked to death, by the police, as he was screaming in agony: "I cannot breathe!"

Open the main page of Yahoo.co.uk, and you will find nothing, no news, about the enormous and ongoing uprising in the United States. However, there is plenty there about Hong Kong, about the National Security Law, as well as the threats made by Trump and Pompeo directed against Beijing.

Paradoxically, one has to visit sites of non-Western media outlets, including RT, for the most detailed reporting on what is happening in the United States:

"The death of Floyd, an unarmed black man who was pinned to the ground and choked out by a police officer, resonated with many protesters, even outside Minneapolis where the tragedy happened."

"I got little brothers, I got nieces, nephews," a protester named Briana Jenkins told Ruptly in Brooklyn, New York. "I'm scared for them to go out in the public and not be with one of us, you feel me. You don't even want your child going to the store real quick because you don't know what could happen."

While the United States, the UK and other Western countries are busy insulting the Chinese government, Hong Kong administration and the Hong Kong police, American citizens, particularly the minorities, are getting gunned down, literally murdered by the law enforcement agents at rates unseen anywhere else in the world.

While Hong Kong rioters march under foreign flags, claiming that they are "fighting for democracy", the increasingly privatized prisons in the United States are holding more detainees than in any other country on Earth. For decades, incarceration in the U.S. has not been about punishing the crime. It has become an enormous business, at the expense of millions of human lives.

Related Topic(s): African-americans; Brutality; China; Democracy; Empire; Flags; Government; International; Killed; Nihilism; (more...) Optimism; Police; Sanctions; Threats, Add Tags  (less...)
Add to My Group(s)
Go To Commenting
The views expressed herein are the sole responsibility of the author and do not necessarily reflect those of this website or its editors.