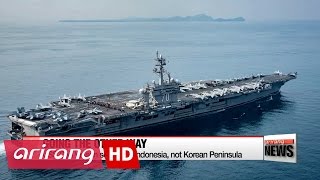 USS Carl Vinson sailed away from, not to, Korean Peninsula ., degrees .. The aircraft carrier USS Carl Vinson, which was supposedly headed to the Korean peninsula, has actually ...
(Image by YouTube, Channel: ARIRANG NEWS)   Details   DMCA

The sound you just heard was a sigh of relief- at least for the present.

The Carl Vinson carrier task force the Trump administration had announced as headed for the Korean peninsula-in response to North Korea testing ballistic missiles- is according to a New York Times account [1] is now heading in the opposite direction toward the Indian Ocean for war games with the Australian Navy.

The Times alluded to a "Defense News" report [2] which revealed the Vinson "On Saturday-according to photographs released by the U.S. Navy-the carrier passed north through the Sunda Strait, the passage between Indonesian islands of Sumatra and Java. It's about 3500 miles from Korea." That revelation was confirmed by "U.S. Navy officials in Pearl Harbor and Washington declined to comment on the ships movements other than to confirm the April 15 movement through the Sunda Strait". Then lastly the Defense News report had this to say, "off the record, several officials expressed wonderment at the persistent reports that the Vinson was already nearing Korea, 'We've made no such statement', said one official".

Well... considering all the bombast we heard lately from the likes of President Trump, his press secretary Sean Spicer, Pentagon spokesman Dana White, Defense Secretary James Mattis, national security advisor H. R. McMaster and Vice President Mike Pence visiting the South Korean side of the demilitarized zone all mouthing assertions the Vinson would bring a show of force that would deter North Korean leader Kim Song un to desist further testing of his ballistic missiles, one would think the US was heading for a direct military confrontation with a North Korea possessing nuclear weapons. That reported carrier task force heading for Korea would hardly be a minor provocation taken lightly by Kim who revealed at the time he'd keep testing ballistic missiles every week and continue to develop his nuclear arsenal as a deterrent against any US attack.

Somehow sanity came about within the Trump crowd and a potential conflict was averted at least for the moment.

Actually it's anyone's guess how sanity prevailed in this instance considering the belligerent outfit filling the White House corridors. Maybe the realization provoking Kim with a task force heading in his direction might indeed be a bad idea. Maybe China's President Xi -who met Trump a week ago in Florida- called the "Donald" got Trump's attention in time to avert a potential disastrous conflict. Who knows.

But leave no doubt there's an unpredictability to the Trump gang starting with the president himself and no one knows what the next hornet's nest this mob will stir up.

The Times article read like a bad "who done it", something reminiscent of a Keystone Kops episode or the gang that couldn't shoot straight or simply the right hand didn't know what the left hand was doing.

But today's reality isn't old Hollywood when provocations made by the US could result in the unthinkable.

Retired. The author of "DECEIT AND EXCESS IN AMERICA, HOW THE MONEYED INTERESTS HAVE STOLEN AMERICA AND HOW WE CAN GET IT BACK", Authorhouse, 2009
Related Topic(s): Carrier; Conflict; Military Adventurism; Navy; North Korea; Task Force; Threat; Weapons, Add Tags
Add to My Group(s)
Go To Commenting
The views expressed herein are the sole responsibility of the author and do not necessarily reflect those of this website or its editors.