Click Here to Remove All Ads
Cross-posted from The Guardian
NBC News, along with a leading US newspaper, insist that Egyptians should be grateful to the US for having 'freed' them 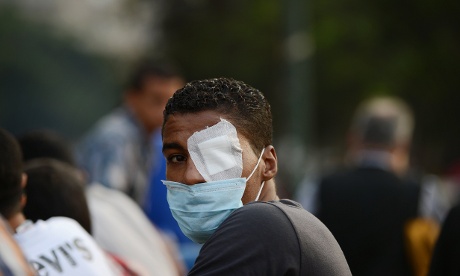 (Image by Unknown Owner)   Details   DMCA
An injured Egyptian protester looks on during clashes with riot police near the US embassy in Cairo. Photograph: Khaled Desouki/AFP/Getty Images

One prominent strain shaping American reaction to the protests in the Muslim world is bafflement, and even anger, that those Muslims are not more grateful to the US. After all, goes this thinking, the US bestowed them with the gifts of freedom and democracy -- the very rights they are now exercising -- so how could they possibly be anything other than thankful? Under this worldview, it is especially confounding that the US, their savior and freedom-provider, would be the target of their rage.

On Wednesday, USA Today published an article with the headline "After attacks in Egypt and Libya, USA Today asks: Why?" The paper appeared to tell its readers that it was the US that freed the Egyptian people from tyranny:

"Attacks in Libya that left four US diplomats dead -- including Ambassador Christopher Stevens -- and a mob invasion of the US Embassy in Cairo, in which the US flag was torn to shreds, have left many to wonder: How can people the USA helped free from murderous dictators treat it in such a way?"

Did you know that the "USA helped free" Egyptians from their murderous dictator? On Thursday night, NBC News published a nine-minute report on Brian Williams' "Rock Center" program featuring its foreign correspondent, Richard Engel, reporting on the demonstrations in Cairo, which sounded exactly the same theme. Standing in front of protesting Egyptians in Tahrir Square, Engel informed viewers that this was all so very baffling because it was taking place "in Cairo, where the US turned its back on its old friend Hosni Mubarak," and then added:

"It is somewhat ironic with American diplomats inside the embassy who helped to give these demonstrators, these protesters, a voice, and allowed them to actually carry out these anti-American clashes that we're seeing right now."

That it was the US who freed Egyptians and "allowed them" the right to protest would undoubtedly come as a great surprise to many Egyptians. That is the case even beyond the decades of arming, funding and general support from the US for their hated dictator (to his credit, Engel including a snippet of an interview with Tariq Ramadan pointing out that the US long supported the region's dictators).

Beyond the long-term US support for Mubarak, Egyptians would likely find it difficult to reconcile Engel's claim that the US freed them with the '"made in USA" logos on the tear gas cannisters used against them by Mubarak's security forces; or with Hillary Clinton's touching 2009 declaration that "I really consider President and Mrs Mubarak to be friends of my family"; or with Obama's support for Mubarak up until the very last minute when his downfall became inevitable; or with the fact that the Obama administration plan was to engineer the ascension of the loathed, US-loyal torturer Omar Suleiman as Mubarak's replacement in the name of "stability."

Given the history of the US in Egypt, both long-term and very recent, it takes an extraordinary degree of self-delusion and propaganda to depict Egyptian anger toward the US as "ironic" on the ground that it was the US who freed them and "allowed" them the right to protest. But that is precisely the theme being propagated by most US media outlets.

Even in Libya, where it's certainly true that many Libyans are happy about the Nato intervention, this bafflement is misplaced. It's always the case that some portion of the populace of an invaded nation will be happy about even the most unjustified invasions: that the Kurds are thrilled by the Iraq war is a fact still cited by Iraq war advocates as proof of the war's justness and wisdom.

But it's also the case that such invasions produce extreme anger, as well: among the families of those killed by the invading forces, or who suffer from the resulting lawlessness and instability. Combine that with the fact that it was repeatedly noted that US involvement in Libya meant that anti-US extremists, including al-Qaida, were being armed and empowered by the US, it is far from mystifying, as Secretary Clinton insisted, that some people in Libya are deeply hostile to the US and want to do it harm.

In the same report, Engel also spent several moments explaining that the primary reason these Muslims have such animosity toward the US is because their heads have been filled for years with crazy conspiracy theories about how the US and Israel are responsible for their woes. These conspiracies, he said, were fed to them by their dictators to distract attention from their own corruption.

Let's leave aside the irony of the American media decrying crazy "conspiracy theories" in other countries, when it is the US that attacked another country based on nonexistent weapons and fabricated secret alliances with al-Qaida. One should acknowledge that there is some truth to Engel's claim that the region's tyrants fueled citizen rage toward the US and Israel as a means of distracting from their own failings and corruption.

But to act as though Muslim anger toward the US and Israel is primarily the by-product of crazy conspiracy theories is itself a crazy conspiracy theory. It's in the world of reality, not conspiracy, where the US and Israel have continuously brought extreme amounts of violence to the Muslim world, routinely killing their innocent men, women and children. Listening to Engel, one would never know about tiny little matters like the bombing of Gaza and Lebanon, the almost five-decade long oppression of Palestinians, the widely hated, child-killing drone campaign, or the attack on Iraq.

And it's in the world of reality, not conspiracy, where the US really has continuously interfered in their countries' governance by propping up and supporting their dictators. Intense Muslim animosity toward the US, including in Egypt, long pre-dates this film, and the reasons aren't hard to discern. That's precisely why the US supported tyranny in these countries for so long: to ensure that the citizens' views, so contrary to US policy, would be suppressed and rendered irrelevant.

Related Topic(s): Democracy; Media Bias; Muslim World; Propaganda, Add Tags
Add to My Group(s)
Go To Commenting
The views expressed herein are the sole responsibility of the author and do not necessarily reflect those of this website or its editors.