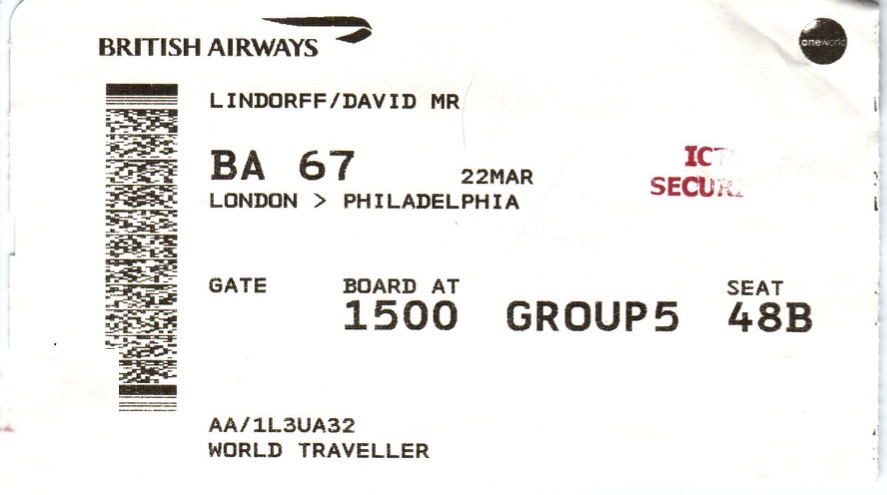 Author's boarding pass with 'ICE Security' stamp on it, placed there at Heathrow and calling for a special security search
(Image by Dave Lindorff/ThisCantBeHappening.net)   Details   DMCA

Sometimes you have to leave the United States to understand how far this country has evolved towards becoming a police state.

I got a good example of this just last week on a trip with my harpsichordist wife to Vienna where she had been contracted to perform on Austrian State Radio in Vienna a concert of music by a leftist Jewish composer who settled in the US after fleeing from Austria just ahead of the Nazi Anschluss that took over and incorporated that country into Germany.

In retrospect, the first indication of a problem occurred the night before our flight, when we tried to make our seat assignments and print our boarding passes for the next day's flight. My wife managed to easily get both her passes for the London Heathrow leg and for the leg on to the Vienna International Airport. My boarding pass for the second leg of the trip came up and got printed okay too, but when we tried to print my boarding pass from Philly to London, it wouldn't come up. Instead there was a message on the website saying we'd have to obtain that pass at the check-in counter. (Eventually by trying on both the American Airlines and the partner British Airlines site, she was able to get that boarding pass printed too, somehow.)

At the Philadelphia International Airport, the next day, I got my initial boarding pass without a problem. But going through the TSA security checkpoint, I was pulled aside for what i was told was a "random" special inspection. Later, at our plane change at Heathrow Airport in the UK, at the point in the flight transfer process where we had to go through a passport and security check, I was told my boarding pass was "not recognized" and that I'd need to go to the airline check-in counter in an adjacent room to obtain a new one. It seemed a little odd - my wife's boarding pass had checked out fine, and our itinerary showed both our names and our adjacent seat reservations for the next flight. But I still naively marked the glitch up to bureaucracy or an inadequate home printer that wasn't working in the scanner

A week later, when it came time to book our seats for the return flight home, the American Airlines website let us make our seat reservations for the entire trip and to place my wife's boarding passes for the two legs of the flight home on her cell phone. But I was only able to access and print the boarding pass for the first leg from Vienna back to Heathrow. Each time we tried to get my second boarding pass for the Heathrow-to-Philadelphia leg , as had happened a week earlier before our first flight, a message appeared saying we'd have to go the airline ticket counter in London, show my passport, and obtain a boarding pass there.

Clearly this was much more than a glitch...

Related Topic(s): Journalist Abuse; Journalists-Journalism; TSA, Add Tags
Add to My Group(s)
Go To Commenting
The views expressed herein are the sole responsibility of the author and do not necessarily reflect those of this website or its editors.