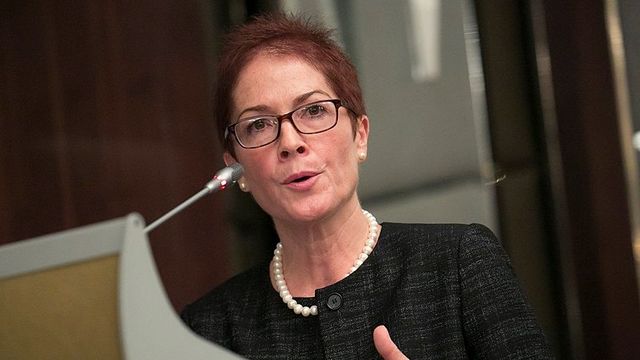 State Department official Marie L. Yovanovitch, the former US ambassador to Ukraine, testified for 10 hours Friday before the House Intelligence Committee, which is heading up the House impeachment inquiry against President Donald Trump. She is the first Trump administration official to appear before the committee since the White House declared in a letter last Tuesday that it would not cooperate in any way with the inquiry.

The letter from White House Counsel Pat Cipollone to House Speaker Nancy Pelosi and three House committee chairmen declared, "President Trump and his Administration cannot participate in your partisan and unconstitutional inquiry." It was portrayed as a blanket ban on any form of cooperation, including both the production of documents and the appearance of witnesses, with the inquiry against Trump over his efforts to induce the Ukrainian government to provide political dirt on one of his likely Democratic opponents, former Vice President Joe Biden.

But only three days later, Yovanovitch spent an entire day in closed-door testimony to the House Intelligence Committee. The New York Times noted the significance of her appearance, writing that her "defiance of the administration's directive against appearing before the impeachment proceeding raises the possibility that other government officials will follow suit."

There were press reports that at least three other witnesses from the national security establishment will testify next week, including Gordon Sondland, ambassador to the European Union, George Kent, an assistant secretary of state, and Fiona Hill, former Russia policy chief for the National Security Council.

Sondland had agreed to appear voluntarily before the committee last Tuesday, only to be pulled out at the last minute by the White House, which then sent Cipollone's letter to the House Democrats. Now he is expected to appear in response to a subpoena from the committee, issued the same day as Cipollone's letter. His lawyer noted that he was under legal compulsion to appear, "notwithstanding the State Department's current direction to not testify."

The Washington Post, which along with the Times has been spearheading the campaign for impeachment, gloated in an editorial Sunday headlined, "The stone wall is cracking." It cited both Yovanovitch's appearance and the likely testimony from Sondland and Hill, adding, "That offers a good example for other State Department officials enmeshed in the Ukraine affair, including the current charge d'affaires in Kiev, William Taylor. It's evident, in other words, that the House investigation can amass abundant evidence of Mr. Trump's abuse of power without his cooperation."

Nonetheless, the editorial urged Pelosi "to hold a vote by the full House to formally authorize the impeachment inquiry." It continued: "And the White House should be offered, in return for its cooperation, privileges that were granted to Mr. Clinton, such as allowing his counsel to participate in hearings and rebut charges."

The editorial proposed that this could become the basis of further charges in the impeachment inquiry: "If, in spite of a full House vote and procedural concessions, Mr. Trump persists in his refusal to comply with congressional subpoenas for documents and seeks to prevent testimony by individuals, the merit of an impeachment charge for obstruction of Congress will be made manifest."

Yovanovitch testified one day after the arrest of two Soviet-born associates of former New York Mayor Rudy Giuliani, Trump's personal attorney, on charges of making illegal campaign contributions to Trump and other Republican candidates in the 2016 elections. The two, Lev Parnas and Igor Fruman, were arrested at Dulles Airport outside Washington as they attempted to board flights to Europe with one-way tickets. Fruman and Parnas have been subpoenaed by the House Intelligence Committee as well.

On Thursday night, the State Department ordered Yovanovitch not to appear the next day. But the Intelligence Committee issued a subpoena Friday morning to compel her to testify, declaring that "the illegitimate order from the Trump Administration not to cooperate has no force." The Post noted, "With a subpoena in hand, officials who are otherwise willing to testify can circumvent the White House's stated prohibition on cooperation with the impeachment probe."

The Post also reported that Sondland's testimony was not likely to be as favorable to Trump as the White House had previously claimed. Sondland received several text messages from the interim ambassador who replaced Yovanovitch in Kiev, William Taylor, indicating his opposition to any effort to condition US arms shipments to Ukraine on Ukrainian cooperation in an anti-Biden campaign.

Sondland ended the exchange of messages with Taylor by telling him explicitly that there was "no quid pro quo" of arms for political dirt. According to the Post, Sondland will tell Congress that Trump told him this directly in a phone call, but that "he has no knowledge of whether the president was telling him the truth at that moment."

"Sondland will hold out the possibility that Trump wasn't truthful in his denial of a quid pro quo," the newspaper reported, as well as the possibility that a different quid pro quo was intended: an agreement by Trump to have Ukrainian President Volodymyr Zelensky visit the White House in return for a public statement that Ukraine was investigating Burisma Holdings, the gas company where Hunter Biden, the son of the former vice president, held a lucrative position on the board of directors, but without mentioning Biden by name.

Sondland is expected to be questioned at length about the activities of Giuliani, who worked for months to pressure the Ukrainian government to relaunch its investigation into Burisma and the Bidens in an effort to torpedo one of Trump's main Democratic opponents. Giuliani bombarded Sondland and other officials with messages, including one in which he referred to the "deliverable" sought by Trump, relating to the Burisma probe.

Patrick Martin writes for the World Socialist Website (wsws.org), a forum for socialist ideas & analysis & published by the International Committee of the Fourth International (ICFI).
Related Topic(s): Burisma; Impeachment; State Department; Testify; Trump Claims Innocence; Trump Impeachment; Trump Prosecution, Add Tags
Add to My Group(s)
Go To Commenting
The views expressed herein are the sole responsibility of the author and do not necessarily reflect those of this website or its editors.