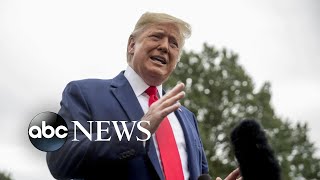 The conflict between President Trump and congressional Democrats escalated over the weekend, with attorneys for the CIA officer who triggered an impeachment inquiry declaring that there were other "whistleblowers" coming forward to provide testimony in support of his allegations against Trump.

Like the first whistleblower, the additional witness or witnesses were said to be intelligence officials. At least one has been interviewed by Intelligence Community Inspector General Michael Atkinson, who declared the initial complaint against Trump, over his efforts to get the president of Ukraine to provide derogatory material on former Vice President Joe Biden and his son, to be "credible" and "urgent."

A second whistleblower, whether he or she made an independent complaint or merely bolstered the first whistleblower, would mark a further intensification of the efforts by sections of the national security apparatus either to remove Trump outright or to shift US foreign policy in a direction even more hostile to Russia.

The most direct expression of the role of the intelligence apparatus in the Democratic Party impeachment drive was the appearance Sunday of former CIA Director John Brennan on NBC's "Meet the Press." The CIA director under Obama now receives a fat paycheck as "senior national security and intelligence analyst" for the television network.

Brennan was asked by host Chuck Todd to "assess the stability of the American government" as the CIA would assess another country. Brennan answered, "We would look at it as a very corrupt government that is under the sway, right now, of this powerful individual who has been able to just corrupt the institutions and the laws of that country."

"I think it's no longer, you know, a democracy," Brennan continued, referring to Trump as "an autocrat," and concluding, "there's just tremendous political instability here " which is consuming the government now. And it's not able to take care of the issues that it needs to address, whether it be on the domestic front or the national security or the foreign policy front."

This is a remarkable declaration by an official who is one of the most bloodstained figures in recent American history. Brennan directed drone missile assassination strikes from the Obama White House before returning to the CIA to oversee its worldwide operations of murder, political subversion and plots against democracy. With the support of the Obama White House, he sought to suppress the Senate investigation into the torture program run by the CIA during the George W. Bush administration.

Brennan is voicing the views of powerful sections of the military-intelligence apparatus, which oppose Trump not only on specific foreign policy decisions in relation to Russia and the Middle East, but regard his administration as too erratic and too much driven by narrow personal and political considerations to effectively advance the interests of American imperialism as a whole.

While Trump is appealing to racism and anti-immigrant bigotry and seeking to mobilize sections of the police and military and outright fascists in his defense, his Democratic Party opponents are operating on a completely right-wing basis, working as the front men for a section of the national security apparatus.

Speaking on CNN's "State of the Union" Sunday, a Democratic senator and presidential candidate, Amy Klobuchar of Minnesota, cited her trips to Ukraine with two Republican warmongers, Lindsey Graham and the late John McCain. She repeated the litany of the US foreign policy elite since the 2014 US-backed ultra-right coup in Ukraine, saying, "they need our country by their side as they deal with a foreign entity, as in Russia, that shot planes down over their country, that's annexed Crimea in their own country. They need us. And President Trump knows that."

The handful of Republican senators who have distanced themselves from Trump have also done so on a right-wing basis. Three Republicans criticized Trump's public appeal on Thursday for the Chinese government to investigate the activities of Biden and his son Hunter, who has extensive business operations in China. In making this statement in front of the television cameras, Trump was doubling down on his bullying of the Ukrainian government for an anti-Biden probe, carried out secretly in a July 25 phone call to President Zelensky.

Senator Mitt Romney said Trump's appeal was "wrong and appalling," and Susan Collins of Maine called it "a big mistake" and "completely inappropriate." Senator Ben Sasse of Nebraska resorted to outright redbaiting. "Americans don't look to Chinese commies for the truth," he told the Omaha World-Herald. "If the Biden kid broke laws by selling his name to Beijing, that's a matter for American courts, not communist tyrants running torture camps."

Other Republican senators followed the lead of Marco Rubio of Florida, another vicious anti-communist, who claimed that Trump's invitation to China was merely a joke -- presumably like Trump's musings about extending his time in office, serving three or four terms, in defiance of the US Constitution, or his claims that his political opponents are guilty of treason.

Patrick Martin writes for the World Socialist Website (wsws.org), a forum for socialist ideas & analysis & published by the International Committee of the Fourth International (ICFI).
Related Topic(s): Campaign Related; Democracy; Democrats; Impeachment; McConnell-Mitch; Republican; Trump; Ukraine; Whistleblowers-ing, Add Tags
Add to My Group(s)
Go To Commenting
The views expressed herein are the sole responsibility of the author and do not necessarily reflect those of this website or its editors.