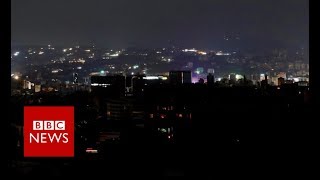 Could it be there was a cyber attack on Venezuela's electrical power grid beginning last Thursday evening that has now lasted 4 days not only in Caracas but all over the country?

Finian Cunningham [1] puts it this way, "There doesn't appear to be any proof of how the purported sabotage was carried out. But a reasonable conjecture would be that some form of cyber attack was launched on the Venezuelan power grid".

"When President Donald Trump and other senior White House officials earlier bragged that 'all options are on the table' for Washington's regime change objective in Venezuela, it has to be assumed now that one of the options included a devastating cyber sabotage of the country's infrastructure."

"The nationwide scale and duration of the outages strongly suggest that the disruption has been caused by deliberate sabotage-as the Venezuelan government says".

"There are several other reasons which point to the US using a 'stealth war' strategy. We know that the Americans have serious cyber-attack capabilities."

Cunningham cites the "Stuxnet" computer virus launched by the US against Iran in 2010, a vast cyber attack on the country's computers controlling its nuclear centrifuges enriching uranium.

So it's clear we know the US has the capability of conducting cyber-warfare and has done so in the recent past.

We also know when it comes to regime change operations the US will resort to any means at its disposal to carry it out.

And in this case the US can claim plausible deniability if it's accused of perpetrating a cyber-attack on Venezuela's electrical power grid-brilliant in a sinister clandestine way.

Just the latest attempt to put the blame for electrical power outage on the incompetence of the recently re-elected President Nicolas Maduro and his government.

According to Cunningham Russia announced last week "it would not tolerate any military intervention in Venezuela."

There you have it. A military invasion by the US military or its proxy mercenaries to overthrow Maduro would be messy and condemned as outright aggression against a sovereign country by the UN and most countries in the world. So why not perpetrate regime change operations in some other way!?

As said before in this space what's ongoing in Venezuela needs to be followed on a daily basis to see the latest machinations against that country's legitimately elected President, overthrow him, put some US supported stooge in his place so the US could seize the country's oil the largest reserves of any country in the world.

To repeat though confirmation of any cyber-attack has not been confirmed-and may never be-knowing what the US has already done with harsh sanctions, rejecting Maduro as the legitimately re-elected president and recognizing Venezuelan Assembly leader Juan Guaido as the self proclaimed new president of the country, plus Trump's national security adviser John Bolton openly saying regime change in Venezuela would be beneficial to US oil companies makes it perfectly clear, the US intends to control the country's oil.

Retired. The author of "DECEIT AND EXCESS IN AMERICA, HOW THE MONEYED INTERESTS HAVE STOLEN AMERICA AND HOW WE CAN GET IT BACK", Authorhouse, 2009
Related Topic(s): Cyber Attack; Cyber-sabotage; Cyber-warfare; Venezuela Oppositions Terrorism, Add Tags
Add to My Group(s)
Go To Commenting
The views expressed herein are the sole responsibility of the author and do not necessarily reflect those of this website or its editors.