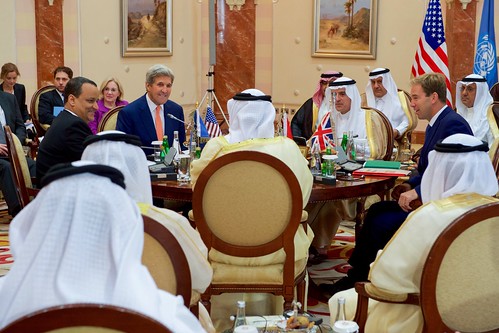 The killing of 140 people by a Saudi air strike, on October 8, in Yemen has renewed focus on the Saudi atrocities and war crimes in Yemen. More than 6,000 people have been killed since the conflict began in March 2015 -- half of them civilians and more than 1,100 of them children, according to the UN.

Tellingly, while the mainstream media is busy in focusing on the US presidential elections and the Syrian crisis, the reports about killing of Yemenis by indiscriminate Saudi air strikes are virtually ignored.

"This weekend, as American attention was devoted almost exclusively to Donald Trump, one of the most revolting massacres took place. On Saturday, warplanes attacked a funeral gathering in Sana, repeatedly bombing the hall where it took place, killing over 100 people and wounding more than 500," Glenn Greenwald of the Guardian reported.

Greenwald argues that these 18 months of atrocities have barely merited a mention in the U.S. election, despite the key role the leading candidate, Hillary Clinton, has played in arming the Saudis, to say nothing of the millions of dollars her family's foundation has received from its regime (her opponent, Donald Trump, has barely uttered a word about the issue, and himself has received millions in profits from various Saudi oligarchs).

On August 15, at least 11 people were killed and 19 injured in an airstrike by the Saudi-led coalition on a Yemeni hospital supported by Me'decins Sans Frontières. Teresa Sancristóval, MSF desk manager for the Emergency Unit in Yemen, was quoted as saying: "This is the fourth attack against an MSF facility in less than 12 months. Once again, today we witness the tragic consequences of the bombing of a hospital. Once again, a fully functional hospital full of patients and MSF national and international staff members, was bombed in a war that has shown no respect for medical facilities or patients. An aerial bomb hit the hospital compound, causing 11 people to lose their lives."

The strike was the latest in an increasing number of attacks targeting places commonly used by civilians, including hospitals where MSF doctors and nurses work. It followed similar airstrikes on a food factory and a school in the first week of August.

Another attack on August 13 hit a school in the Haydan district in northern Saada governorate, killing 10 students who were all under 15, according to MSF. An attack on the same day in Razih district, also in Saada governorate, hit the house of the school principal, Ali Okri, killing his wife, four children and relatives.

In September 2015, 135 people died in Taiz governorate when a wedding party was bombed in the village of Wahija, near al-Mukha, and more than 30 died in June this year when airstrikes hit a market in Hayfan during the supposed ceasefire. Taiz has also seen the largest number of school buildings struck in a single governorate with one site in al-Omary, Dhubab being hit nine times. This is consistent with the Saudi strategy of repeat targeting -- Taiz airport and the docks in al-Mukha have been hit 16 and 18 times respectively.

From the start of the hideous Saudi bombing campaign against Yemen 18 months ago, two countries have played active, vital roles in enabling the carnage: the U.S. and U.K. The atrocities committed by the Saudis would have been impossible without their steadfast, aggressive support, reports Greenwald adding: "British and American military officials are in the command and control center for Saudi airstrikes on Yemen" and "have access to lists of targets." In sum, while this bombing campaign is invariably described in Western media outlets as "Saudi-led," the U.S. and U.K. are both central, indispensable participants.

Warren Strobel and Jonathan Landay of Reuters reported on Monday, that Obama was explicitly warned not only that the Saudis were committing war crimes, but that the U.S. itself could be legally regarded as complicit in them:

The Obama administration went ahead with a $1.3 billion arms sale to Saudi Arabia last year despite warnings from some officials that the United States could be implicated in war crimes for supporting a Saudi-led air campaign in Yemen that has killed thousands of civilians, according to government documents and the accounts of current and former officials.

The Obama administration has offered to sell $115 billion worth of weapons to Saudi Arabia over its eight years in office, more than any previous U.S. administration.

The Saudi campaign is aimed at reinstating the ousted president, Abd Rabbu Mansour Hadi, who first fled to the southern city of Aden before going to Riyadh in March 2015. The Houthis were pushed out of Aden in July 2015 and have lost ground near Marib but their territory has generally not changed during 18 months of bombing. Houthi fighters are allied with the former president Ali Abdullah Saleh and control Sana'a and vast swaths of territory in western Yemen. The Saudi 'Operation Decisive Storm,' which was presumed would take weeks, is now a 16-month-old protracted conflict.

Even before the war, Yemen was the poorest Arab nation and its people are now starving or malnourished. The Saudi intervention turned a crisis into a catastrophe. Some 6,427 people are known to have been killed in the fighting, but these are only the figures for casualties known to the health authorities. A UN says that 14.1 million Yemenis, 54 per cent of the population, have no access to health care. OXFAM estimates that 82 per cent of Yemen's 21 million population are in need of humanitarian assistance.

Author and journalist. Author of Islamic Pakistan: Illusions & Reality; Islam in the Post-Cold War Era; Islam & Modernism; Islam & Muslims in the Post-9/11 America. Currently working as free lance journalist. Executive Editor of American (more...)
Related Topic(s): Airstrikes; Bombing; Guardian; Hospital; Houthis; Oxfam; Saudi Arabia; Yemen; Yemen Destruction, Add Tags
Add to My Group(s)
Go To Commenting
The views expressed herein are the sole responsibility of the author and do not necessarily reflect those of this website or its editors.