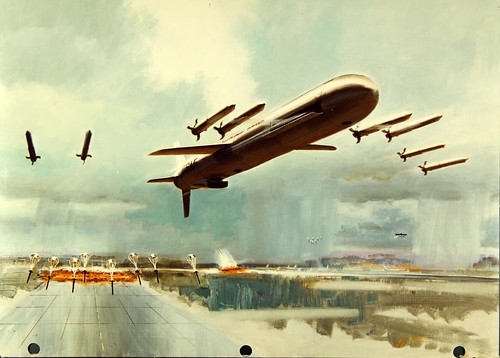 President Trump's National Security Advisor John Bolton and Secretary of State Mike Pompeo are saying that they have proof that Iran blew holes in two oil tankers in the Strait of Hormuz linking the Persian Gulf to the Arabian Sea, and so, we're being told in a report in the Jerusalem Post and earlier in Newsweek magazine, they are considering, along with Pentagon brass, having the US launch an intense missile attack on Iran's main uranium refining plant.

There's a lot of breathless, exciting reporting about this prospect in the US media, with some news organizations talking enthusiastically about the idea, and with others opposing it, but their opinions on the matter are in either event, based only upon the question of whether or not Iran can be proven to have been behind the attack on the tankers, or on whether or not Trump can launch such a war without Congressional approval in advance.

Most European countries' leaders are saying that there's no solid evidence pointing to Iran. And many US news organizations appear to agree. So does Japan, whose flag one of the damaged ships flies.

But none of them critics or opponents of a US attack on Iran are raising a more significant question: Does the US have a legal or even moral right to launch a war against Iran if Iran does not pose an "imminent threat" to the US, to US interests or to US allies whom it has an obligation to defend.

The answer is a resounding "No!"

Iran has no navy that can threaten the US, it has no army that can reach the US, and it has no planes or missiles that can reach the US. It does threaten some countries that the US would not like to see attacked oil-rich countries the UAE, Kuwait and Saudi Arabia, for example, but it is unlikely to do so and isn't threatening to do so, and in any event, the US is now obligated to defend any of those countries. It doesn't even, as a net oil exporter, need any of their oil! Iran could conceivably launch missiles that might reach Israel, but as it has no nuclear weapons, and even with a crash program wouldn't by any stretch of the imagination or of the English language have them "imminently," such missiles, if they could even strike the target from that distance, would do little damage, as Saddam Hussein proved with his Scud missiles launched at Israel.

And if that's the case, the only way the US can legally attack Iran, even in retaliation for the alleged and unproven "attack" on two tankers in the Strait of Hormuz, would be following a United Nations Security Vote endorsing such an attack or invasion. And there has been no such resolution, nor would one be possible given Russia's and China's veto power"

Related Topic(s): Iran War; War Crimes, Add Tags
Add to My Group(s)
Go To Commenting
The views expressed herein are the sole responsibility of the author and do not necessarily reflect those of this website or its editors.