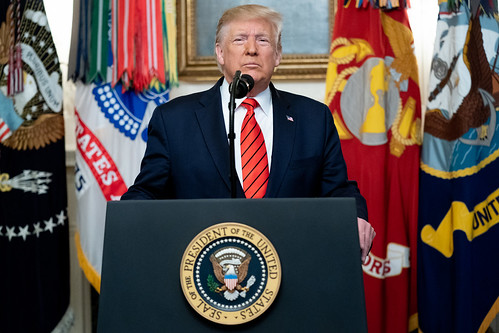 The Western media is reporting that US military forces have killed the supposed leader of the so-called "Islamic State in Iraq and Syria" (ISIS) in Syria's northern governorate of Idlib.

The United States military has conducted a special operations raid targeting one of its most high-value targets, Abu Bakr al-Baghdadi, the leader of the Islamic State militant group (ISIS), Newsweek has learned. President Donald Trump approved the mission nearly a week before it took place.

Amid reports Saturday of U.S. military helicopters over Syria's northwestern Idlib province, a senior Pentagon official familiar with the operation and Army official briefed on the matter told Newsweek that Baghdadi was the target of the top-secret operation in the last bastion of the country's Islamist-dominated opposition, a faction that has clashed with ISIS in recent years.

Newsweek would include "details" of the supposed raid worthy of a Hollywood action movie finale, claiming:

The senior Pentagon official said there was a brief firefight when U.S. forces entered the compound and that Baghdadi then killed himself by detonating a suicide vest. Family members were present. According to Pentagon sources, no children were harmed in the raid but two Baghdadi wives were killed, possibly by the vest detonation.

As with most every claim the Western media or the US military makes without any sort of evidence, this most recent story cannot or shouldn't be trusted, especially when there's little to nothing that can be verified about it.

The supposed military operation - unfolding just miles from the Syrian-Turkish border - comes at a time when the prospects of America's proxy war in Syria have reached all time lows.

First - US proxy forces jointly armed and aided by Turkey as well as other US allies - have been all but eliminated from the battlefield with their remnants residing in Idlib, increasingly encircled by Syrian forces.

Attempts by the US to intervene in Syria directly to oversee the overthrow of the government in Damascus was also thwarted by Russia's military intervention beginning in 2015.

US forces have most recently retreated from the Syrian-Turkish border in Syria's northeast, setting the stage for a joint Russian-Turkish agreement that appears poised to see the disarmament of Kurdish militants or their possible integration into Syria's security forces. The deal also aims at fully restoring Syria's territorial integrity - fully derailing Washington's secondary plans to "Balkanize" Syria.

The Russian-Turkish deal comes at a time when US-Turkish relations are particularly shaky, with Ankara realigning itself within a Middle East emerging out from under decades of US hegemony.

Despite alleged ISIS leader al Baghdadi lurking about Syria and Iraq throughout the duration of Syria's war - why has the US with all its vast resources only now been able to "find" and "eliminate" him? The timing and location couldn't have been better for the US if the entire incident was staged.

Related Topic(s): Syria; Syrian Arab Army; Syrian Kurds; Syrian Refugees; Syrian Situation; Syrian Withdrawal, Add Tags
Add to My Group(s)
Go To Commenting
The views expressed herein are the sole responsibility of the author and do not necessarily reflect those of this website or its editors.