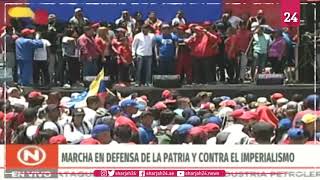 The United States is taking illegal and dangerous actions to execute regime change in Venezuela. In January, Juan Guaidó declared himself "interim president," in a strategy orchestrated by the United States to seize power from President Nicola's Maduro.

In March, Guaidó announced that "Operation Freedom," an organization established to overthrow the Maduro government, would take certain "tactical actions" beginning on April 6. Part of the plan anticipates that the Venezuelan military will turn against Maduro.

This strategy is detailed in a 75-page regime change manual prepared by the U.S. Global Development Lab, a branch of the U.S. Agency for International Development (USAID). The manual advocates the creation of rapid expeditionary development teams to partner with the CIA and U.S. Special Forces to conduct "a mix of offensive, defensive, and stability operations [in] in extreme conditions."

Some of these actions will, in all likelihood, involve combat operations. A USAID official said, "Anybody who doesn't think we need to be working in combat elements or working with SF [special forces] groups is just naive."

The manual was written by members of Frontier Design Group (FDG), a national security contractor whose "work has focused on the wicked and sometimes overlapping problem sets of fragility, violent extremism, terrorism, civil war, and insurgency," according to its mission statement. FDG was the "sole contractor" that USAID hired to write a "new counterinsurgency doctrine for the Trump administration," Tim Shorrock wrote at Washington Babylon.

Guaidó is funded by USAID's sister organization, the National Endowment for Democracy, which is notorious for meddling in other countries and putting a good face on the CIA's dirty business, as the late journalist William Blum explained.

Writing in Salon, Medea Benjamin and Nicola's J. S. Davies cited Blum's statement that the United States generally opts for "low-intensity conflict" over full-scale wars. They noted that "'low-intensity conflict' involves four tools of regime change: sanctions or economic warfare; propaganda or 'information warfare'; covert and proxy war; and aerial bombardment. In Venezuela," they added, "the U.S. has used the first and second, with the third and fourth now 'on the table' since the first two have created chaos but so far not toppled the government."

Indeed, a combination of punishing sanctions imposed by the United States and blackouts exploited if not engineered by the U.S. have been unsuccessful in removing Maduro and installing Guaidó.

The Venezuelan economy was in direstraits before the Trump administration imposed harsher sanctions in January.

Crude oil production in Venezuela fell by 142,000 barrels a day in February, according to OPEC. "This shows that the sanctions imposed by the Trump administration in January had an immediate, very harsh impact on Venezuela's economy, and on the general population, which depends on the export revenue from oil for essential imports including medicine, food, medical equipment, and other life-saving necessities," Mark Weisbrot, co-director of the Center for Economic and Policy Research, stated.

If this drop in oil production continues at the same rate, Venezuela stands to lose more than $2.5 billion in oil revenues during the next year. The U.S.-imposed sanctions will speed that decline.

On April 4, Johns Hopkins Bloomberg School of Public Health and Human Rights Watch issued a 71-page report documenting food and medicine shortages and sharp increases in disease throughout Venezuela. They characterize the situation as a humanitarian emergency and recommend a full-scale response by the United Nations secretary general.

Guaidó's opposition "plans to use aid as their chief political weapon," according to TheNew York Times.

Although in February, the United States tried to deliver humanitarian assistance to Venezuela though Colombia, Maduro refused to accept it.

Related Topic(s): Military; Oil; Sanctions; Security; Venezuela Oppositions Terrorism, Add Tags
Add to My Group(s)
Go To Commenting
The views expressed herein are the sole responsibility of the author and do not necessarily reflect those of this website or its editors.