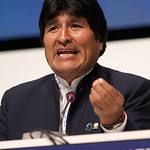 Amid the impeachment inquiry and ongoing battle between the two factions of the US power elite, the anti-Trump "liberal" faction and the pro-Trump "conservative" faction, their mutual support for the recent coup in Bolivia has demonstrated a convergence in defense of shared oligarchic interests. Bernie Sanders and Tulsi Gabbard, whose presidential campaigns have become a bane of the power elite, are the only Democratic candidates to voice objections to the coup.

During Evo Morales' tenure as Bolivian president, the county's social and economic indicators improved dramatically though strong economic growth and a focus on the provision of social services. Poverty declined by 42 percent and extreme poverty by 60 percent. Real GDP per capita increased by 50 percent, double the rate for Latin America as a whole. The government inaugurated a universal health care system earlier this year, ensuring access to health services for millions of uninsured Bolivians. Although the Morales government employed a variety of economic policies, it was the rejection of IMF policies and the replacement of foreign corporate ownership with a nationalized hydrocarbon sector that provided the economic foundation for this substantial progress. [1] Equally noteworthy, social movements participated in government and indigenous rights were given precedence by an indigenous president for the first time in Bolivia, a country with a majority indigenous population. The Morales government certainly was not perfect, but its accomplishments far outweighed its failures.

Morales won his fourth term in office in October elections, with a sufficient margin of victory over neoliberal Carlos Mesa to avoid a runoff election. In response to fraud accusations from Mesa and violent opposition protesters, Morales invited the Washington-based Organization of American States (OAS) to perform an audit of the election. Following the audit, an OAS report alleged irregularities in the election, but an analysis by the Center for Economic and Policy Research (CEPR) found "no evidence that irregularities or fraud affected the official result that gave President Evo Morales a first-round victory." [2] Nevertheless, Morales agreed to new elections. When the US-trained commander of the armed forces then "suggested" Morales resign before the end of his current term, Morales submitted his resignation and fled to Mexico. There can be little doubt that such a "suggestion" from a military general in a country with a long history of military rule amounts to a coup.

Both power factions in the United States were quick to endorse the coup. The liberal establishment's major media portrayed Morales as an illegitimate leader responsible for the chaos. The Washington Post's editorial board pointedly declared, "Bolivia is in danger of slipping into anarchy. It's Evo Morales's fault." [3] According to the editorial board at The New York Times, Morales fell due to his own "arrogance" and "what remains is to hope that Mr. Morales goes peacefully into exile in Mexico and to help Bolivia restore its wounded democracy." [4]

Illustrating the oligarchic consensus on this issue, right-wing Senator Marco Rubio, a Trump ally and favorite of leading conservative organizations like The Heritage Foundation, approvingly retweeted the Times article with the comment "@NYTOpinion gets it right on #Bolivia." [5] Secretary of State Mike Pompeo offered "congratulations" to right-wing Bolivian Senator Jeanine Áñez for declaring herself interim president. [6] Áñez, a member of a political party with few seats in a legislative assembly where Morales' MAS party holds a majority, has a history of tweeting racist comments about Bolivia's indigenous peoples. Trump believes the anti-democratic coup "preserves democracy" in Bolivia. [7]

This US power elite consensus, however, may end in the post-coup period. Beginning in the 1980s, the liberal establishment-aligned State Department launched a policy of "democracy promotion" in Latin America. Since then, US governments have shifted from previous support for military dictatorships to an insistence on regular elections and civilian rule in the region coupled with a neoliberal economic model and the continued protection of US corporate interests. For the liberal faction, new elections resulting in a Mesa presidency and the return of IMF policies would represent an ideal outcome of the coup. While backing the "interim" government headed by Áñez, who is consolidating her power without any democratic mandate, a prolonged unelected regime would fail the liberal faction's own legitimacy test for Latin American governments. In recent days, after security forces have killed pro-Morales demonstrators, The Washington Post and The New York Times have given space to articles critical of Áñez. [8]

Trump and the conservative faction have more in common with Áñez and her ally, Luis Fernando Camacho, a businessman and far-right Christian activist who has emerged as a leading anti-Morales figure. Prior to Morales' presidency, his family owned a monopoly on natural gas distribution in Bolivia's largest city. Camacho has been nicknamed "the Bolivian Bolsonaro" in reference to Brazilian President Jair Bolsonaro. Similarly, to Trump's delight, Bolsonaro has been dubbed "the Trump of the Tropics." The two presidents are building a close relationship. At a White House press conference during Bolsonaro's visit earlier this year, Trump remarked, "I think Brazil's relationship with the United States, because of our friendship, is probably better than it's ever been by far." [9] Bolsonaro has defended and even praised the military dictatorships that ruled many Latin American countries from the 1960s to 1980s, only criticizing Brazil's military regime for the "mistake" of torturing rather than killing on a larger scale. [10]

Joseph Raso is the author of A Tale of Two Factions: The US Power Structure Since World War II (2018). He has written on Bolivian politics for publications in the US and Bolivia.

Joseph Raso is the author of A Tale of Two Factions: The US Power Structure Since World War II (published 2018). He taught political science at McMaster University in Canada and has worked at think tanks in Washington, DC.

US Oligarchic Consensus on the Bolivian Coup

Trump and the Factions of the US Oligarchy