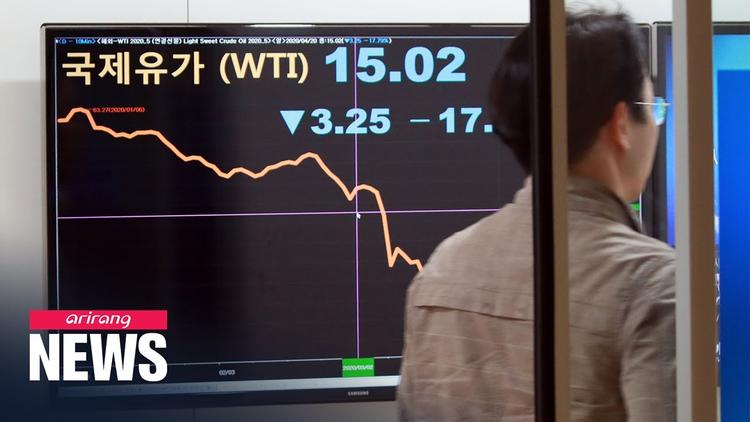 May contracts for West Texas Intermediate (WTI) crude oil went as low as -- $37.63 on Monday. So report Jillian Ambrose and Martin Farrer at The Guardian. The price, well below zero, was a first for the US oil market, and showed the conviction of traders that the economy would not in fact start back up in May. Millions of gallons of oil are being stored on giant supertankers around the world, which costs money, and the below-zero price for a barrel reflected that storage cost.

There was a bit more confidence about the June situation, with prices skyrocketing to all of $1.10 a barrel in Tuesday morning trading in East Asian markets, according to Reuters. That is about the price of water. Over-all, however, June oil is priced at $20 a barrel at the moment, which seems wishful thinking that the market will reevaluate. The price of a barrel of of WTI petroleum on January 1 of this year was about $60 a barrel.

Since it costs at least $30 a barrel to produce oil in the US, and some fracked fields cost more like $40 or $50 a barrel, we could see a raft of bankruptcies among smaller producers that lack deep pockets or have already taken on a lot of debt. Companies specializing in hydraulic fracturing (breaking underground rocks with high-pressure water streams to release oil and gas deposits) are at special risk, since fracking is much more expensive than most simple drilling. So too are the firms that loaned money to the frackers. Fracking not only wrecks the earth through global heating but it produces blighted landscapes full of ponds of polluted and toxic water, and has been banned by civilized places like New York and France.

There will be knock-on effects of those bankruptcies on the private equity firms that loaned money to smaller oil producers and fracking firms. Investment in the petroleum industry has plummeted since 2017, with investors aware that fossil fuels are living on borrowed time. Their main product is actually global heating and vast environmental damage because they emit dangerous heat-trapping gases like carbon dioxide. The oil companies are likely looking at multi-billion-dollar tort lawsuits because they hid the dangers of the climate emergency and even actively muddied the waters by funding denialism. Therefore, the $36.63 price for a barrel of oil is already probably overly optimistic.

Private equity firms and others put $64 billion into the oil industry in 2019. It isn't that much in that sector, but it is $62 billion more than anyone in his right might should have risked on a toxic stranded asset. And right about now, the value of those investments looks as though it could go to zero.

In turn, smaller private equity firms with exposure to the oil sector are also facing a myriad of bankruptcies. Those who put money into petroleum were damn fools and also kind of dicks, since they didn't care about what they were doing to the planet.

Coal companies are also dropping like flies, partly because of the coronavirus lock-down, but partly because their finances were already stressed by consumer concerns about coal's deadly impact on the environment (it is the fossil fuel that produces the most carbon dioxide of all). Natural gas and ever cheaper solar and wind have also damaged coal's bottom line.

Both Iowa and Kansas now get 40 percent of their electricity from wind, which outstrips coal in both.

The pain the coronavirus lock-down is bringing is also hurting the renewables, but they are potentially far more resilient than coal. Farmers hurting because food demand has decreased will still pick up some revenue from the wind and solar farms on their property, since people will still need air conditioning this summer. Moreover, research and development is making wind and solar ever cheaper, and so when the economy roars back a year or a year and a half from now, new wind and solar projects will likely be even less expensive than they are now, and coal will be dead in the water.

Related Topic(s): Coal Industry; Corona Virus Coronavirus Covid-19; Fracking; Money; Oil; Oil Crisis Global Disruption, Add Tags
Add to My Group(s)
Go To Commenting
The views expressed herein are the sole responsibility of the author and do not necessarily reflect those of this website or its editors.