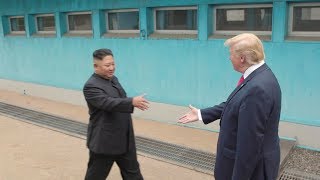 Trump's "fire and fury like the world has never seen" remark about North Korea shifted to the appearance of friendship with Kim Jong-un, DJT saying "(h)e wrote me beautiful letters and we fell in love."

Two summits and Trump's meeting with Kim across the DMZ on North Korean soil, a first by a US sitting president, achieved nothing toward ending US hostility toward the country since the Korean peninsula was divided post-WW II.

Talks between Kim and Trump broke down because of unacceptable US demands in return for empty promises.

Its history is clear a record of breached treaties, conventions and other deals, the US agreeing to one thing, then going another way why it can never be trusted.

Pompeo and Bolton sabotaged talks between Kim and Trump. They got DJT to make Kim an offer to be refused demanding the DPRK transfer its nuclear arsenal and bomb fuel to the US.

In writing, his regime also insisted that Pyongyang dismantle its nuclear and whatever chemical and biological infrastructure it may have, along with eliminating its ballistic missiles, launchers, and related facilities, as well as handing over to the US its dual-use technologies.

Almost everything hi-tech or close to it can be considered potentially dual-use.

Other unacceptable demands included North Korea providing the Trump regime with a full and comprehensive explanation of its nuclear program, giving US inspectors unimpeded access to its facilities, halting construction of everything related to its nuclear activities, along with shifting its scientists and technicians to non-nuclear activities.

The Trump regime demanded unilateral DRRK surrender to its will in return for nothing, not even modest good faith gestures, just empty promises to be broken like countless times before.

Bolton earlier said "(w)e have very much in mind the Libya model from 2003, 2004" in dealings with North Korea.

Pyongyang has no intention of entrapping itself the same way. Its nuclear and other weapons are solely for defense by a nation that never attacked another state throughout its history.

It's willing to abandon its nuclear arsenal only in return for iron-clad security guarantees, an end to decades of uneasy armistice, removal of unacceptable sanctions, and normalization of relations with the US and other countries.

Its nuclear deterrent was developed and remains maintained, fearing a repeat of what happened in the early 1950s the rape and destruction of its country, massacring millions of its people by a hostile aggressor.

Related Topic(s): Denuclearization; John Bolton Warmonger; Korea; Nuclear; Secretary Of State Mike Pompeo, Add Tags
Add to My Group(s)
Go To Commenting
The views expressed herein are the sole responsibility of the author and do not necessarily reflect those of this website or its editors.