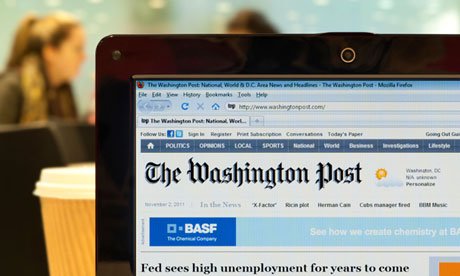 (Image by Unknown Owner)   Details   DMCA
The Washington Post this week admitted it was part of an "informal arrangement" to conceal from its readers a US drone base in Saudi Arabia. Photograph: Alamy

The US media, over the last decade (at least), has repeatedly acted to conceal newsworthy information it obtains about the actions of the US government. In each instance, the self-proclaimed adversarial press corps conceals these facts at the behest of the US government, based on patently absurd claims that reporting them will harm US national security. In each instance, what this media concealment actually accomplishes is enabling the dissemination of significant government falsehoods without challenge, and permitting the continuation of government deceit and even illegality.

One of the most notorious examples was in mid-2004 when the New York Times discovered -- thanks to a courageous DOJ whistleblower -- that the Bush administration was eavesdropping on the electronic communications of Americans without the warrants required by the criminal law. But after George Bush summoned to the Oval Office the paper's publisher (Arthur Sulzberger) and executive editor (Bill Keller) and directed them to conceal what they had learned, the NYT complied by sitting on the story for a-year-and-a-half: until late December, 2005, long after Bush had been safely re-elected. The "national security" excuse for this concealment was patently ludicrous from the start: everyone knew the US government was trying to eavesdrop on al-Qaida communications and this story merely revealed that they were doing so illegally (without warrants) rather than legally (with warrants). By concealing the story for so long, the New York Times helped the Bush administration illegally spy on Americans.

The Washington Post's Dana Priest, in a superb act of journalism, reported in 2005 that the CIA was maintaining a network of secret "black sites" where detainees were interrogated and abused beyond the monitoring scrutiny of human rights groups and even Congress. But the Post purposely concealed the identity of the countries serving as the locale of those secret prisons in order to enable the plainly illegal program to continue without bothersome disruptions: "the Washington Post is not publishing the names of the Eastern European countries involved in the covert program, at the request of senior US officials."

Related Topic(s): Government Accountability; Israel; Media And Democracy; Media Complicity; Media Hypocrisy; Media Press Repression; Michael Bloomberg; Universities; Wikileaks, Add Tags
Add to My Group(s)
Go To Commenting
The views expressed herein are the sole responsibility of the author and do not necessarily reflect those of this website or its editors.