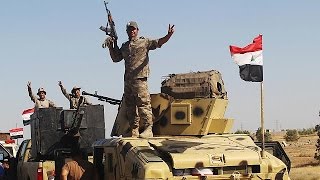 As Iraqi military launched their offensive on Fallujah this week to retake the key city from Daesh terrorists, there were bizarre Western media headlines indicating US "concern" for civilian casualties.

Given that US military forces killed hundreds of civilians in the same city back in 2004 and bequeathed a deadly radioactive legacy to the population from depleted uranium munitions, such belated American concern for civilian life in Fallujah does not sound credible.

Could there be another agenda, such as preventing Iraqi forces from delivering a knock-out blow to the IS militants (also known as Daesh) holed up inside the city?

Although the US is officially waging a war to defeat these jihadists, the terrorists are, at the same time, documented to function covertly as Pentagon assets for regime change in neighboring Syria.

This week, US government-owned news outlet Voice of America ran this headline on Monday: "Concerns over civilian suffering as Iraqi forces surround Fallujah." The headline's wording was subsequently changed in later VOA editions after Iraqi forces actually began their offensive on the Daesh stronghold.

Other Western news media outlets also expressed alarm that some 50,000 civilians trapped in the battleground city might come to harm from the intense fighting, or be used as human shields by its terrorist defenders.

Daesh militants first occupied Fallujah in early 2014, and along with the northern Iraqi city of Mosul and eastern Syria's Raqqa, it formed part of the cross-border triangular axis of the self-proclaimed Islamic State of Iraq and the Levant.

Retaking Fallujah would thus be a crucial strategic victory for the Iraqi government forces against the extremist group. It is believed that Fallujah, which is only 50 km from Baghdad, has been a major source of suicide bombers who have killed hundreds of civilians in the Iraqi capital over the past two years. Three suicide attacks earlier this week reportedly killed at least 20 people in greater Baghdad.

The Iraqi military had surrounded Fallujah over the past week before launching their offensive. The delay was intended to give civilians as much chance as possible to evacuate.

What seems curious is the apparent concern for civilian safety in Fallujah as expressed in the US and Western media.

This is the same city that was almost razed to the ground by American and British forces during two major battles in 2004 -- one year after the US-led invasion of Iraq and the fall of Iraqi dictator Saddam Hussein. The Fallujah resistance was then made up mainly of Sunni militia.

During the US-British assaults on Fallujah, it is estimated that more than 1,000 civilians were killed -- a disturbingly high casualty toll, similar to that incurred by the armed militants. The Americans spared no effort to crush the resistance -- deploying over 10,000 troops, warplanes, 2,000-pound aerial bombs, helicopter gunships, howitzers and snipers in what was reckoned to have been the fiercest fighting by US forces since the Vietnam War. The US military even blared rock music at deafening levels in order to draw out protesters who would then be cut down by sniper fire.

But the killing of civilians did not stop when those battles ended. Years after the artillery smoke cleared, the people of Fallujah have been battling alarming cancer rates and horrific birth defects as a result of the depleted uranium munitions that the American forces bombarded the city with in 2004. Millions of rounds of this highly toxic metal are believed to have been fired by US forces during their assaults on Fallujah.

Several scientific studies, conducted by Iraqi and foreign medics, have since reported that the rate of cancer, childhood leukemia and fatal birth deformities have increased several-fold in Fallujah since the US-British military offensives against the city in 2004. In one study, it was found that the incidence of birth defects in Fallujah were higher than those recorded in Hiroshima or Nagasaki -- the Japanese cities hit by US atomic bombs in 1945.

In addition to toxic uranium, US forces also indiscriminately used massive quantities of White Phosphorus as incendiary weapon against the city. One investigative Italian television documentary, The Hidden Massacre, confirmed numerous local reports that people had died from grotesque skin burns inflicted by the White Phosphorus.

At the time of the offensives, the US military claimed that the phosphorus was being used as illuminating flares in order to target combatants. A year later, in November 2005, the Pentagon finally admitted that the chemical was actually used as an "incendiary weapon." US troops on the ground callously referred to the White Phosphorus bombardments in Fallujah as "shake and bake" operations, because of the twin-effect of inciting terror in the target population and burning victims down to the bone. A victim's head could be completely incinerated while the rest of the body remained unscathed.

When the Americans and British were torching Fallujah and indiscriminately mowing down women and children, there was scarcely any expression of concern in the Western media about civilian casualties. It was justified as "collateral damage" in a "necessary war."

The question is: is this duplicitous Western focus on Fallujah, then and now a reflection of mere hypocrisy or double-think? Or is there a more nuanced agenda?

Related Topic(s): Daesh; Fallujah; Iraqis; Media Bias, Add Tags
Add to My Group(s)
Go To Commenting
The views expressed herein are the sole responsibility of the author and do not necessarily reflect those of this website or its editors.