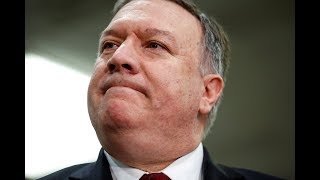 "Iran's retention of archives related to its past covert nuclear weapons program (the Amad Plan), as well as its efforts to keep many scientists and technicians from that former weapons program working together under the continued leadership of the former head of that program, raise serious questions regarding whether Iran intended to preserve the option to resume elements of a nuclear weapons program in the future."

US Department of State report, "Adherence to and compliance with Arms Control, Nonproliferation, and Disarmament Agreements and Commitments," April 2019

With absolutely zero good reasons for waging war on Iran, the Trump administration goes on making stuff up to lie the country into yet another war. The template looks like the Bush administration's successful effort to lie the US into the Iraq War, the catastrophic effects of which keep unfolding.

The State Department report quoted above garnered some anti-Iran media headlines, but the total fact content is slim. The reports states as facts that Iran has an archive and that it has kept some of a scientific team working together. That's it. There are no other alleged facts, damaging or otherwise.

There is a lot of speculation in service to fear-mongering (nothing yet as egregious as then National Security Adviser Condoleeza Rice saying with no basis in fact, "We don't want the smoking gun to be a mushroom cloud."

The Trump people are working on it, but some are apparently dragging their heels for the sake of some sort of integrity. The State Department first posted its report online on April 15, then pulled it down, then re-posted it April 17 (the quote above is from that version), without yet explaining what was going on.

According to Reuters, the report "provoked a dispute with U.S. intelligence agencies and some State Department officials concerned that the document politicizes and slants assessments about Iran, five sources with knowledge of the matter said." Reuters did not report any details of the supposed dispute. As a factual matter, the politicized and slanted assessments of Iran are confirmed by a straightforward reading of the text.

The larger issue in the report is international compliance with the 1968 Treaty on the Non-Proliferation of Nuclear Weapons (NPT), to which there are 190 parties. Among the non-parties are nuclear-armed states India and Pakistan, as well as South Sudan. The report does not mention them, but has some sharp words for North Korea, Syria, and Russia.

The State Department also omitted Israel, another nuclear-armed state that is not a party to the treaty. Besides being non-compliant, Israel is allied with the US in obdurate opposition to the NPT's primary purpose of nuclear disarmament.

And in a bookend hypocrisy, the report omitted Saudi Arabia and the US suggestion to give them nuclear technology, which would surely be an NPT violation.

The release of the report follows Secretary of State Mike Pompeo's April 10 appearance before the Senate Foreign Relations Committee in support of State's $40 billion budget request. In his written statement, with no supporting evidence, Pompeo submitted an article of faith that is at least partly false:

"We know that the Islamic Republic of Iran's authoritarian regime will continue to use their nation's resources to proliferate conflict in Iraq, Yemen, Syria, and beyond. It will continue to bankroll terrorist groups like Hamas and Hezbollah. The United States will therefore work together with our allies and partners to counter Tehran's aggressive actions to undermine peace and security in the Middle East and beyond."

Last time anyone checked, it was the US that invaded Iraq in a war of aggression that violated international law. It was Saudi Arabia, with US support, that attacked Yemen in a war of aggression that violates international law. In Syria, the country came apart because of multiple factors including a record drought, popular resistance to a dictator, and broad international interference of which Iran was not a major factor. Or, to put it another way, Pompeo lied, in service to his self-proclaimed Christo-fascist ideology.

Republican senator Rand Paul of Kentucky challenged Pompeo on the administration's apparent march to war on Iran. After trying to sidestep the questioning, Pompeo asserted that the US could attack Iran based on the Authorization to Use Military Force (AUMF), passed overwhelmingly in 2001 after the 9/11 attacks. The only member of Congress to vote against this blank war-making check was Representative Barbara Lee of Oakland.

The AUMF requires some connection to the 9/11 attackers to be invoked. There has never been any credible evidence connecting Iran even indirectly to 9/11, which was carried out by mostly Saudi nationals. Nevertheless Pompeo deceitfully asserted: "There is a connection between the Islamic Republic of Iran and al-Qaeda. Period, full stop."

Vermonter living in Woodstock: elected to five terms (served 20 years) as side judge (sitting in Superior, Family, and Small Claims Courts); public radio producer, "The Panther Program" -- nationally distributed, three albums (at CD Baby), some (more...)
Related Topic(s): Iran; Iran President Hassan Rouhani; Iran War; Propaganda; Sanctions; Treaty, Add Tags
Add to My Group(s)
Go To Commenting
The views expressed herein are the sole responsibility of the author and do not necessarily reflect those of this website or its editors.