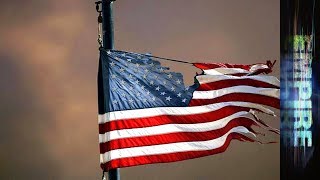 US empire is in decline. Reports of the end of the US being the unitary power in world affairs are common, as are predictions of the end of US empire. China surpassed the United States as the world economic leader, according to Purchasing Power Parity Gross National Product, and Russia announced new weapons that can overcome the US' defense systems.

What is happening in the United States, in response, is to do more of what has been causing the decline. As the Pentagon outlined in its post-primacy report, the US' plan is more money, more aggression and more surveillance. Congress voted nearly unanimously to give the Pentagon tens of billions more than it requested. Military spending will now consume 57% of federal discretionary spending, leaving less for basic necessities. The Trump administration's new nominees to the State Department and CIA are a war hawk and a torturer. And the Democrat's "Blue Wave" is composed of security state candidates.

The US is escalating an arms race with Russia and China. This may create the mirror image of President Reagan forcing Russia to spend so much on its military that it aided in the break-up of the Soviet Union. The US economy cannot handle more military spending, worsening austerity when most people in the US are in financial distress.

This is an urgent situation for all people in the world. In the US, we carry an extra burden as citizens of empire to do what we can to oppose US imperialism. We must be clear that it is time to end wars and other tools of regime change, to become a cooperative member of the world community and to prioritize the needs of people and protection of the planet.

There are a number of opportunities to mobilize against US empire: the April 14-15 days of action, the Women's March on the Pentagon in October and the mass protest planned against the military parade in November.

This week, President Trump fired Secretary of State Tillerson, nominated CIA director Mike Pompeo for the State Department and chose Gina Haspel to replace Pompeo at the CIA. As we write this newsletter, National Security Adviser H.R. McMaster is on the verge of being fired. The deck chairs are being rearranged on the Titanic but this will not correct the course of a failing foreign policy.

The Pompeo and Haspel nominations are controversial. Pompeo believes torturers are patriots. He is a war hawk on every conflict and competing country, including Russia and especially Iran. And, unlike Tillerson, who stood up to Trump on occasion, Pompeo kisses-up to Trump, defending his every move. Haspel led a CIA black site torture center and ordered destruction of evidence to obstruct torture investigations.

The Democrat's record on torture is not good. President Obama said he would not prosecute Bush era torturers, infamously saying, "we need to look forwards as opposed to looking backwards." John Brennan who was complicit in Bush-era torture, withdrew under pressure from becoming CIA director in 2008, instead becoming Deputy National Security Adviser, which did not require confirmation. After Obama's re-election, Brennan became Obama's CIA director.

Brennan was inconsistent on whether torture worked. He tried to elevate Haspel, but the controversy around her prevented it. When the CIA spied on the US Senate Intelligence committee over their torture report, Brennan originally lied, denying the spying, but was later forced to admit it. He was not held accountable by either the Democrats or Obama.

Haspel headed a black site in Thailand where torture was carried out. She ordered the destruction of 92 secret tapes documenting torture even though the Senate Judiciary requested the tapes, as had a federal judge in a criminal trial. According to a federal court order, the tapes should have been turned over to comply with a FOIA request. Counsel for the White House and CIA said the tapes should have been preserved. Haspel's actions should lead to prosecution, not to a promotion as head of the agency, as CIA whistleblower John Kiriakou, who exposed torture and served time in prison for it, reminds us.

The Trump nominations leave the Democrats on the cusp of a complete surrender on torture in an election year. Caving on torture by approving Pompeo and Haspel will anger Democratic voters and risk the high turnout need for their anticipated 2018 "Blue Wave."

Republican Senator Rand Paul says he will oppose both nominees. If all the Democrats oppose, the Senate will be split 50-50, requiring one more Republican to block the nominees. Fifteen Democrats supported Pompeo's nomination as CIA director, so Democratic opposition is not ensured. Will Democrats oppose torture or be complicit in normalizing torture?

Kevin Zeese is co-chair of Come Home America, www.ComeHomeAmerica.US which seeks to end U.S. militarism and empire. He is also co-director of Its Our Economy, www.ItsOurEconomy.US which seeks to democratize the economy and give people greater (more...)
Related Topic(s): Decline; Denial; Empire; Pentagon; Republican; Saker; Torture, Add Tags
Add to My Group(s)
Go To Commenting
The views expressed herein are the sole responsibility of the author and do not necessarily reflect those of this website or its editors.