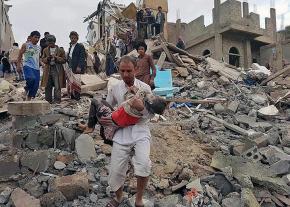 At first glance, it may seem like a positive move. The Trump administration and London are both putting pressure on Saudi Arabia and the United Arab Emirates to implement a ceasefire in Yemen's atrocious war. Washington and London are also calling for warring sides to enter into peace negotiations within a month.

What's wrong with that, you may ask? Well, as Houthi rebels who took over Yemen at the end of 2014 are saying, the country has been under aggression for the past three years from a Saudi-led coalition supported militarily by the US, Britain and France. The unrelenting war on the poorest country in the Middle East has led to the world's worst humanitarian crisis in decades, with over half of the population -- some 14 million people -- at risk of starvation, according to the UN.

Therefore, the appropriate legal and moral course of action now is not merely a ceasefire or talks. It is for the Western-backed Saudi, Emirati coalition to immediately halt its criminal aggression against Yemen. In short, stop the foreign interference in Yemen's sovereign affairs.

US Secretary of State James Mattis and Britain's Foreign Minister Jeremy Hunt appear to be impelled by humanitarian concern for the massive human suffering in Yemen with their recent calls for cessation of hostilities.

But a more nuanced reading of their exhortations suggest that the real concern is to burnish the blood-soaked image of the Saudi coalition that their governments support, and, secondly, to inveigle the Houthis into a negotiations framework that will result in undue foreign influence over Yemen's politics.

Last week, Washington announced that it was suspending mid-air refueling flights for Saudi and Emirati warplanes that have been pounding Yemen since March 2015, which has resulted in a horrendous death toll among civilians. The indiscriminate killing of the Saudis and Emirati air strikes has been amply documented, albeit downplayed by Western media. The latter keep repeating a figure of 10,000 dead in Yemen -- a figure which has bizarrely remained unchanged for at least the past two years. The real death toll from air strikes is unknown but likely to be near 50,000.

American, British and French military support for the murderous operations in Yemen should have stopped months, even years ago, if official humanitarian concerns were genuine.

The question is: why the sudden effort by Washington and London, as well as Paris, to call for a ceasefire and follow-on political talks?

One factor, no doubt, is the barbaric murder of Saudi journalist Jamal Khashoggi by assassins linked to the House of Saud. Turkish authorities believe that Khashoggi was brutally murdered in the Saudi consulate in Istanbul on October 2, his body hacked to pieces and dissolved in industrial-strength acid. Audiotapes obtained by the Turkish authorities have implicated the Saudi Crown Prince Mohammed bin Salman in the murder plot against the dissident journalist.

The gruesome details of Khashoggi's killing and the blatant lies that the Saudi rulers have issued to cover up their barbarity have heaped immense pressure on Washington, London and Paris over their close ties with the House of Saud. Public outrage has demanded that sanctions be imposed on Riyadh, such as cancelling multi-billion-dollar arms deals.

It seems significant that the acute disgrace over the appalling Khashoggi affair and the association of the US, British and French governments with such a despotic Saudi regime has in turn prompted these Western powers to mount a damage-limitation exercise in public relations.

This is where the Yemen war provides an opportunity for the Western powers and their Saudi clients to salvage their tarnished public image.

By pushing for a ceasefire in Yemen, Washington, London and Paris can claim to be "getting tough" with the Saudis for the sake of alleviating "humanitarian suffering." By appearing to respond to the Western calls for a ceasefire, the Saudis can then also claim they are relenting out of humane concern.

However, such pleas have not stopped Saudi and Emirati-backed militia on the ground besieging the Yemeni port city of Hodeida on the Red Sea, for which 80-90 percent of the entire population in the country rely on for food and other vital supplies. In other words, the Western-backed Saudi coalition is using starvation tactics to bring the Houthi rebels and the wider Yemeni population to their knees. That is a monstrous war crime.

Related Topic(s): Houthis; Humanitarian; Starvation; Yemen Destruction, Add Tags
Add to My Group(s)
Go To Commenting
The views expressed herein are the sole responsibility of the author and do not necessarily reflect those of this website or its editors.