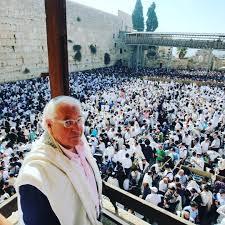 Donald Trump's US ambassador to Israel, the Orthodox Jew David Friedman, told a group of Hispanic Christians who were visiting the illegally occupied city of Jerusalem, "Israel is on the side of God, and we don't underestimate that."

Not only is Friedman an Orthodox Jew who believes the ungodly and cruel Hebrew Bible/Old Testament is the Word of God that must be taken seriously, he is also a member of the Jewish priestly caste, the Kohanim. Kohanim are believed to be descendants of Aaron, the brother of the genocidal maniac Moses. As a member of the priestly cast, Friedman is able to give Jewish blessings on holy days, as he did during Passover.

In response to the New York Times article, Friedman responded as you would expect an Orthodox Jew and member of the Jewish priestly caste, the Kohanim, to respond. Friedman used the Hebrew Bible/Old Testament, the man-made book that is falsely advertised as the Word of God and which is the basis for the Jewish state of Israel. Friedman also changed "Israel is on God's side" to "God is on Israel's side" in his attack on the New York Times article. Friedman said that "billions of people around the world accept the Old Testament as part of their faith", which, unfortunately, is a true statement.

He went on to say that Jewish prophets in the Old Testament prophesied about the Jews returning to the land of Israel, which Friedman said is happening today. He then said, "So where am I off in saying that God is on the side of Israel? The fact that God has fulfilled his prophecies and delivered the people of Israel to their land is demonstrably true."

As a superstitious/religious Jew and Jewish priest, Friedman sees the creation of the modern Jewish state of Israel by Jewish terrorists and politically savvy US President Harry Truman as really being done by God.

In Albert Einstein's "God letter" he pointed out that contrary to Deuteronomy 7:6, which claims God chose the Jews "above all people that are upon the face of the Earth", there is nothing chosen about the Jews. Einstein also warned us that if we want to survive in a nuclear age, we must develop a new way of thinking. He wrote:

The stakes are way too high to tolerate the destructive superstitions of the ancient man-made religions in today's nuclear world. We need to take the path of Albert Einstein, not that of David Friedman.

Bob Johnson is a paralegal and a freelance writer in Florida. He was raised Roman Catholic, but after reading Thomas Paine's The Age of Reason, he became a Deist. In 1993 he founded the World Union of Deists and in 1996 he launched the first web (more...)
Related Topic(s): America; Faith; God; Israel; Israel Firsters; Israel Runs Washington; Israeli Pressure On US; Israeli_Propaganda; People; People; (more...) Religion; Thinking, Add Tags  (less...)
Add to My Group(s)
Go To Commenting
The views expressed herein are the sole responsibility of the author and do not necessarily reflect those of this website or its editors.