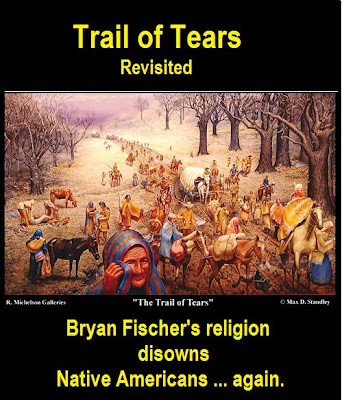 In all the discussions about the European settlement of the New World, one feature has been conspicuously absent: the role that the superstition, savagery and sexual immorality of native Americans played in making them morally disqualified from sovereign control of American soil.


The American Family Association has had to apologize for its statements on just about everyone: Jews, gays, African Americans and Muslims. It was, therefore, just a matter of time before they said something derogatory about Native Americans.

Bryan Fischer's diatribe on Native Americans is almost in the same class of religious intolerance as his statements about Muslims (especially how it would be the "compassionate" thing to do to deport all of them). And while some academics argue that the primary gifts of the missionaries to the Natives in the New World were measles and syphilis, Fischer will have you think that his latest admonition, is somehow truly, er,  Christian. Yes, people, it is truly a WTF moment!

Some responders to his latest broadcast/blog:

This can't be a legit article. It really can't. I'm not saying nobody could come to the pathetic conclusions that the author did, but to publish it on a site associated with family values? Did we skip ahead to April 1st?

"Grandson, there are too many White People, and not enough Human Beings." ~ "Little Big Man"

So people who killed Indians were doing the Lord's work, clearly. Is it still OK to kill Indians? Please let us know ASAP so we know how to proceed...

In the past, Bryan Fischer has shown himself to have the basic philosophy of "Only white Christians need apply," denigrating  people of color, gays and Muslims. Appearing on his daily radio talk show (sponsored by the American Family Association) has become a badge of honor for some Right Wing proponents who are not afraid to state their views, even if those views are tinged with bigotry. Ever since Tony Perkins (Family Research Council) gave Fischer his imprimatur by having Fischer speak at the hallowed Values Voter Summit, the extreme Right has dared to make forays into dark territory on Fischer's show.

There are some odd parallels we can see in Fischer's philosophy: Queen Isabella and Michele Malkin:

Queen Isabella of Castille, under direction of her confessor, Torquemada, enabled the horrific Inquisition and expelled Moors and Jews from Spain. Operating with a "convert or die" dictum, Isabella was quiet, but ruthless: thousands died during her reign and 200,000 Jews were exiled. More than anything, however, the  torture and murder were power grabs by her and her husband, King Ferdinand, in their religious zealotry to make the kingdom "one nation, one religion." Isabella may have felt like a latter day Constantine*, for she was never bothered by the carnage that resulted.

Michele Malkin must have certainly been in agreement with Fischer (no word as yet from her, but there surely will be). She was, after all, as disgusted by the reference to Native American religions at the Tucson memorial:

Rev. Dan Vojir is has been writing/blogging on religion and politics for the better part of ten years. A former radio talk show host (Strictly Books " Talk America Radio Network) and book publisher, Dan has connected with some of the most (more...)
Related Topic(s): American Family Association; American Family Association; Bryan Fischer; Family Research Council; Intolerance; Race Native American- First Nation; Race Native American- First Nation; Syphilis; Tony Perkins; Torture, Add Tags
Add to My Group(s)
Go To Commenting
The views expressed herein are the sole responsibility of the author and do not necessarily reflect those of this website or its editors.