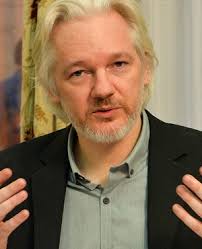 Nils Melzer, UN Rapporteur on Torture, belatedly learned that Julian Assange was being tortured. Meltzer came to realize that he had been misled by the "news" about Assange in the Establishment media, so he did his own investigation.

With his findings and impressions in hand, Melzer thought that June 26, the International Day in Support of Torture Victims, would be a fitting occasion to publish an op-ed on the results of his investigation. It turned out that his draft was as welcome as the proverbial skunk at a picnic. Here is a note that Melzer appended to his op-ed once it was finally posted in Medium:

"This Op-Ed has been offered for publication to the Guardian, The Times, the Financial Times, the Sydney Morning Herald, the Australian, the Canberra Times, the Telegraph, the New York Times, the Washington Post, Thomson Reuters Foundation, and Newsweek. None responded positively."

The title given his op-ed in Medium on June 26, 2019 was Demasking the Torture of Julian Assange: On the occasion of the International Day in Support of Torture Victims. See here. Here's a sample:

Beginning of text of Melzer op-ed, (with thanks to Medium):

I know, you may think I am deluded. How could life in an Embassy with a cat and a skateboard ever amount to torture? That's exactly what I thought, too, when Assange first appealed to my office for protection. Like most of the public, I had been subconsciously poisoned by the relentless smear campaign, which had been disseminated over the years. So it took a second knock on my door to get my reluctant attention. But once I looked into the facts of this case, what I found filled me with repulsion and disbelief.

Surely, I thought, Assange must be a rapist! But what I found is that he has never been charged with a sexual offence.

True, soon after the United States had encouraged allies to find reasons to prosecute Assange, Swedish prosecution informed the tabloid press that he was suspected of having raped two women. Strangely, however, the women themselves never claimed to have been raped, nor did they intend to report a criminal offence. Go figure.

Moreover, the forensic examination of a condom submitted as evidence, supposedly worn and torn during intercourse with Assange, revealed no DNA whatsoever neither his, nor hers, nor anybody else's. Go figure again. One woman even texted that she only wanted Assange to take an HIV test, but that the police were "keen on getting their hands on him." Go figure, once more.

Ever since, both Sweden and Britain have done everything to prevent Assange from confronting these allegations without simultaneously having to expose himself to US extradition and, thus, to a show-trial followed by life in jail. His last refuge had been the Ecuadorian Embassy.

Alright, I thought, but surely Assange must be a hacker! But what I found is (For the rest, click here.)

Expect to find almost nothing in the U.S. or other Western media about how a publisher of authentic documents has been set up to spend the rest of his life in prison, but there were some glimmers of truth shining through German, Swiss, and Austrian media early this year. In February, one of the main German TV channels (ZDF) did a highly unusual, and instructive, interview with Melzer, focusing on the sexual allegations in Sweden.

Ray McGovern works with Tell the Word, the publishing arm of the ecumenical Church of the Saviour in inner-city Washington. He was an Army infantry/intelligence officer and then a CIA analyst for 27 years, and is now on the Steering Group of Veteran Intelligence Professionals for Sanity (VIPS). His (more...)
Related Topic(s): Assange; Corporate Fascism; Corporate Media; Extradition; Media Blackout; Rape; Torture 13, Add Tags
Add to My Group(s)
Go To Commenting
The views expressed herein are the sole responsibility of the author and do not necessarily reflect those of this website or its editors.